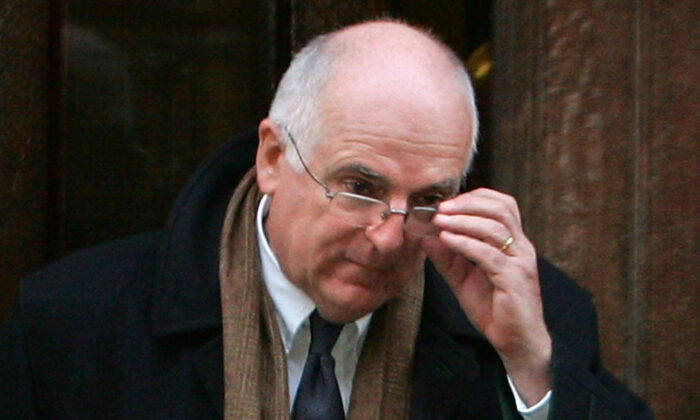 Former head of British intelligence Sir Richard Dearlove said he believes Chinese authorities will have most likely destroyed any potential evidence that the CCP (Chinese Communist Party) virus leaked from a lab in Wuhan.

Questions have swirled about the origin of the CCP virus, the pathogen that causes COVID-19, with two competing theories continuing to grab headlines—one that the virus made a natural jump from animal to human, and the other that it arose due to a lab leak.

While the thesis that the virus leaked from a lab at the Wuhan Institute of Virology was initially dismissed by a number of prominent scientists, including White House adviser Dr. Anthony Fauci, there’s now been a remarkable pivot. Fauci has acknowledged that he’s no longer that sure that the virus didn’t leak from the lab, while President Joe Biden has ordered U.S. intelligence to “redouble” their efforts to examine both theories, which he characterized as equally plausible.

But Dearlove, who from 1999 to 2004 headed up MI6, the British intelligence agency, told the Telegraph newspaper’s Planet Normal podcast on Thursday that efforts to establish the true origin of the virus face the daunting obstacle that China’s communist officials will have likely destroyed key evidence.

“We don’t know that’s what’s happened, but a lot of data has probably been destroyed or made to disappear, so it’s going to be difficult to prove definitely the case for a gain-of-function chimera being the cause of the pandemic,” Dearlove said.

Gain-of-function research involves increasing the virulence or transmissibility of pathogens to better understand and predict the emergence of disease-causing agents to make it easier to come up with a solution before the disease emerges as a pandemic. While the Wuhan facility, which has links to the Chinese military, likely engaged in gain-of-function research on coronaviruses, heated controversy has erupted over whether U.S. government grants were used for this purpose.

Fauci recently acknowledged that some $600,000 in grants went to the Wuhan facility, and although he denied that it was used to fund gain-of-function research, he admitted he could not be sure the money wasn’t used against its intended purpose, which was to study coronaviruses in bats.

“The sub-grant was about $600,000 over a period of five years. So, it was a modest amount. And the purpose of it was to study the animal-human interface, to do surveillance, and to determine if these bat viruses were even capable of transmitting infection to humans,” Fauci recently told members of Congress.

While initially dismissive of the lab leak theory, Fauci recently said that he is “not convinced” that the virus developed naturally, and called for a deeper probe into its origins. Dearlove, too, urged a thorough investigation.

“This is why scientific analysis is now so important because although that can’t prove the case 100 percent, the thorough biochemical analysis puts the weight of evidence to this being a man-made lab experiment, a natural virus that has been enhanced,” the former spy chief said.

Calling the CCP a “pretty terrifying regime,” Dearlove said China’s communist authorities do “some things we consider unacceptable and extreme in silencing opposition to the official line.”

The CCP has denied any connection between the virus’s origins and the Wuhan lab, and has pushed the “natural zoonotic” hypothesis—that the virus was transmitted to humans from an animal host—though no intermediate host has yet been found. In addition, the Chinese regime has also put forward claims that the virus originated outside of China. At a May 24 press briefing, Foreign Ministry spokesman Zhao Lijian accused the United States of releasing the virus from the Fort Detrick military base in Maryland.

Dearlove said that “in the end it’s going to boil down to scientific evidence because the data is no longer available, unless some courageous Chinese individual, probably a scientist, comes forward.”

Dr. Chris Gottlieb, former commissioner of the Food and Drug Administration (FDA), said on May 30 that “China could provide evidence that would be exculpatory here,” including giving access to blood samples from the Wuhan lab staff, as well as other lab records, including some of the original viral source strains.

He said the case for the lab leak theory is further buoyed by circumstantial evidence pointing to known issues at the Wuhan facility.

Gottlieb also said the COVID-19 outbreak speaks to the need for viewing “public health through the lens of national security,” and urged U.S. intelligence services to become more involved in probing the virus’s origin.