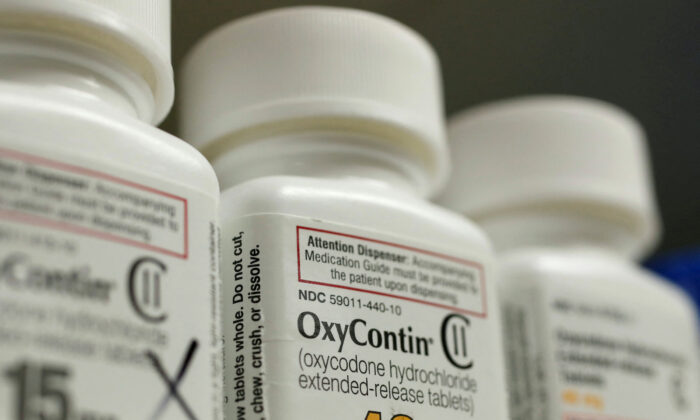 Bottles of prescription painkiller OxyContin made by Purdue Pharma LP sit on a shelf at a local pharmacy in Provo, Utah, on April 25, 2017. (George Frey/Reuters)
Companies

Purdue had been named as one of more than 40 defendants—drugmakers and distributors—in a proposed class-action lawsuit brought by British Columbia in 2018 on behalf of all provincial and federal Canadian governments. The lawsuit aims to recover healthcare costs for the “wrongful conduct of opioid manufacturers, distributors, and their consultants.”

“The proposed settlement with Purdue Canada has been agreed to by all federal, provincial, and territorial governments and totals C$150 million in monetary benefits, plus additional benefits including access to information and documents relevant to the lawsuit,” British Columbia said in a statement on Wednesday.

It added that this is the largest settlement of a governmental health claim in Canadian history.

Purdue Pharma Canada told Reuters it agreed to pay the sum and provide access to information sought by prosecutors for which the company “will be released from all past and present government opioid-related claims and liability.”

During the first year of the COVID-19 pandemic, there was a 96 percent jump in such deaths, the data showed.

“We know that no amount of money can bring back those who have died, but we are committed to holding corporations and others accountable for acts of alleged wrongdoing committed in the manufacturing and distribution of opioid products,” British Columbia’s Attorney General David Eby said.

The settlement includes no admission of wrongdoing or liability on the part of Purdue Pharma Canada or any of its related parties, the company said in an emailed statement.