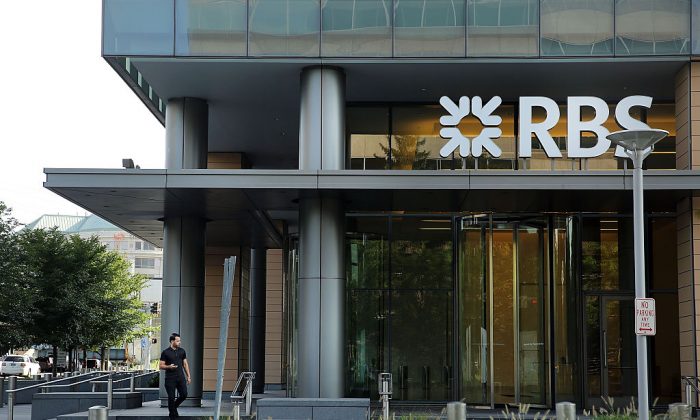 LONDON—Britain’s government sold 7.7 percent of Royal Bank of Scotland shares for 2.5 billion pounds on Tuesday, realising a loss of more than two billion pounds on part of its investment in the lender it rescued in 2008.

The government sold the shares for 271 pence each in an overnight placement to institutional investors, a price almost half what it paid when bailing out RBS for 45.5 billion pounds at the height of the financial crisis.

“This sale represents a significant step in returning RBS to full private ownership and putting the financial crisis behind us,” Chancellor of the Exchequer Philip Hammond said.

Opposition Labour party had earlier criticised the share sale when it was announced on Monday evening, saying that taxpayers would lose out and the government should have held out for more.

Once one of the globe’s biggest banks, RBS under former Chief Executive Fred Goodwin embarked on an aggressive expansion course before its disastrous bid for Dutch lender ABN AMRO in 2007 left it perilously weakened as the financial crisis hit.

Few argue that Britain’s Labour government of the time erred in rescuing the lender, but the years since have been marked by relentless restructuring and legal costs at RBS that have all but wiped out its profits and chances of returning taxpayers’ money.

The government is set to sell the rest of its 62 percent stake in RBS over the next few years, most likely in a similar fashion to Monday night’s sale although it could offer some of the shares to the public.