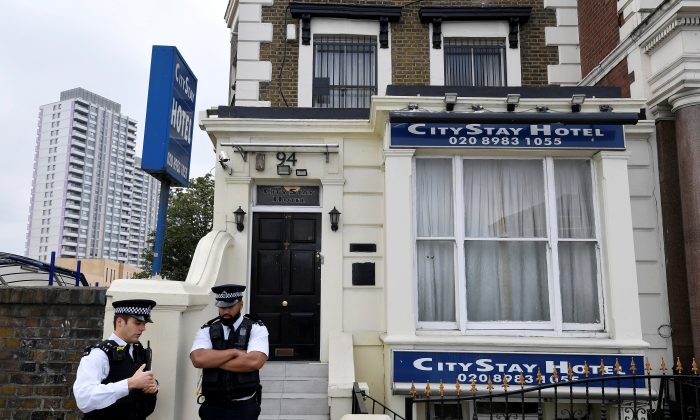 Police officers stand outside the City Stay Hotel used by Alexander Petrov and Ruslan Boshirov; who have been accused of attempting to murder former Russian spy Sergei Skripal and his daughter Yulia; London, on Sept. 5, 2018. (Reuters)
UK

LONDON—British police have identified a third Russian military intelligence officer they believe carried out a reconnaissance mission before the attempted murder of double agent Sergei Skripal.

Skripal, a former Russian military intelligence officer who betrayed dozens of agents to Britain’s MI6 foreign spy service, was found unconscious with his daughter Yulia on a public bench in the southern English city of Salisbury on March 4.

Britain said they were poisoned with Novichok, a military-grade nerve agent developed by the Soviets, and has accused two men it says are officers from Russia’s GRU military intelligence service of carrying out the attack.

Russia has repeatedly denied any involvement in the poisoning, as have the two men identified by Britain.

The Telegraph said British police and security services think a third Russian agent visited Salisbury to help plan the attack on Skripal. The newspaper did not name the man.