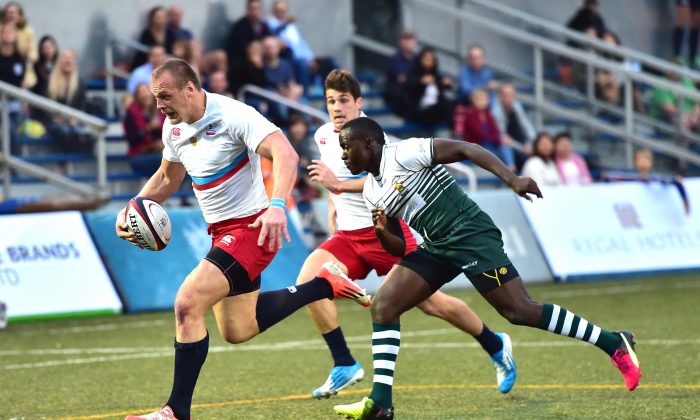 Denis Simplkevich broke two tackles to touchdown for Russia’s third try in their 19-16 win over Zimbabwe on Day 1 of the 2016 Cup of Nations series at King’s Park on Friday Nov 11. (Bill Cox/Epoch Times)
HK Rugby Union

Bright Start by Hong Kong in Cup of Nations

HONG KONG—On a cool Friday evening in Hong Kong, the World Rugby sanctioned, Regal Hotels Cup of Nations kicked-off at Kings Park. The tournament is hosted by Hong Kong Rugby Union, with 4 teams competing, Russia, Hong Kong, Zimbabwe and Papua New Guinea. In World Rugby ranking terms, Russia is the top ranked side, at No 21, and tournament favourites, defending their title from last season. Hong Kong is ranked No 25, Zimbabwe No 37, Papua New Guinea No 69.

Russia narrowly defeated Zimbabwe in the opening game winning 19-15. A game of two halves. Both sides started brightly, showing different styles of play. Russia with their size and strength was the more physical side; Zimbabwe, were quicker, and spoiled and countered well. Russian forward power put the first points on the board, with a pushover try by flanker Victor Gresev, converted by flyhalf Ramil Gaysin giving the Russians an early 7-0 lead after 15minutes.

This was extended in identical fashion after 30 minutes, with another pushover try, again by Gresev, converted by Gaysin: and Russia led 14-0.

Zimbabwe, converted a penalty on 32 minutes by flyhalf Lenience Tambwera to narrow the score to 14-3. Then 3 minutes later, Russia cut through the Zimbabwe defence with powerful running, and winger Denis Simplkevich broke two tackles to touchdown for Russia’s third try. The conversion was missed but Russia looked comfortable leading 19-3.

On the stroke of half-time Zimbabwe converted another penalty by Tambwera to narrow the deficit to 19-6.

In the 2nd half, instead of Russia running away with the game, Zimbabwe slowly but inexorably clawed back with 3 successful penalties by Tambwera to punish Russian transgressions. After 72 minutes it was 19-15 to Russia, with Zimbabwe one try away from an upset win. A final burst of energy by Russia kept play in the Zimbabwe 22, to close out the game to win 19-15. A closer match than expected; the smaller, quicker Zimbabwe side proved a match for the larger, physical gym-honed Russians.

In the 2nd match, Hong Kong played Papua New Guinea, and comfortably won 51-5. Despite a spritely start by PNG, Hong Kong soon let discipline, pace and game management dictate the match. Matt Rosslee, playing at flyhalf, controlled the game for Hong Kong. His kicking from the tee and hand, was accurate, tactically astute and his passing gave the Hong Kong backs space and width to run at PNG.

Rosslee opened the scoring with a penalty after 8 minutes; then on 13 minutes Hong Kong created space for winger Salom Yiu Kam-Shing to score in the corner. Rosslee did the honours with a fine kick from the touchline to extend Hong Kong’s lead to 10-0. Five minutes later, a barreling run by Hong Kong flanker Matt Lamont split the PNG defense, and scrumhalf Cado Lee sprinted across the line. Rosslee added the conversion. Hong Kong led 17-0.

Dan Falvey, the Hong Kong No 8, scored a pushover try, again converted by Rosslee. Then centre Tyler Spitz, broke through the PNG defense to touchdown, with Rosslee adding the extras, and after 30minutes Hong Kong led 31-0, and secured a 4-try bonus point. Another penalty by Rosslee before halftime, gave Hong Kong a comfortable lead at the break 34-0.

Hong Kong opened the second half with another penalty by Rosslee, to lead 37-0; then Yiu scored his 2nd try, converted by Rosslee, and on 66 minutes captain and fullback, Ed Rolston powered through for Hong Kong’s 6th try, with points added by Rosslee, giving Hong Kong a solid lead 51-0.

The final movement on the scoreboard belonged to PNG, with a breakaway try by centre Tisa Kautu, who sprinted 70 metres to provide PNG consolation for their efforts that evening.

Hong Kong had a final flurry in the PNG 22, but was unable to score again. At the final whistle the match finished 51-5 to Hong Kong.

It was excellent start for Hong Kong, who looked sharp, and did not miss a beat with players coming from the bench. It was a confidence boost for Rosslee at flyhalf. He will not enjoy the same space against either Zimbabwe or Russia.

In round 2 on Tuesday, Russia defeated PNG 49-19, while Hong Kong came away with a 34-11-win against Zimbabwe.

After 2 rounds Hong Kong lead with 10 points, Russia is 2nd on 9 points, Zimbabwe 3rd on 1 point and PNG are yet to score.

The final round will be played on Saturday at Hong Kong Football Club with Zimbabwe vs Papua New Guinea at 3pm and Hong Kong vs Russia at 5pm.

Both of these matches should be good viewing. Zimbabwe and Papua New Guinea have both showed a lot of flair, with good handling, open play and fast running – they should be well matched. The second game between Hong Kong and Russia is a repeat of the Championship match last year which Russia won 31-12.