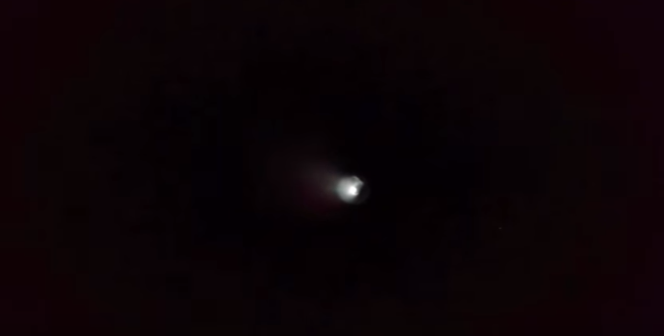 But it's actually a Trident missile
By Zachary Stieber

A bright moving object captured streaking across the California sky prompted speculation that it was a UFO. However, an official said the light, which was seen as far as Nevada, was actually a Trident D5 missile launch,

Multiple videos from eyewitnesses went up on YouTube, with many referring to the light as an unidentified flying object.

But a government official later went on Twitter to say the object was actually a missile test.

“Light seen in OC sky was confirmed through JWA tower to be a Naval test fire off the coast,” the Orange County Sheriff’s Department said on Twitter, referring to John Wayne Airport in Santa Ana in the San Francisco Bay Area.

A Navy spokesman told the San Diego Union-Tribune that the object was a Trident missile fired from a submarine off the coast.

It was a scheduled test, Cmdr. Ryan Perry, of the Navy’s Third Fleet added.

“Each test activity provides valuable information about our systems, thus contributing to assurance in our capabilities,” Perry said in a statement released to the newspaper.

But some Twitter users indicated they didn’t believe the official explanation, emphasizing they still believe it was a UFO.

Here’s the full statement from the Navy’s Third Fleet on the test, according to NBC 7 in San Diego:

“Navy Strategic Systems Programs conducted scheduled Trident II (D5) missile test flight at sea from USS Kentucky, an Ohio Class SSBN, in the Pacific Test Range off the coast of Southern California. The tests were part of a scheduled, ongoing system evaluation test. Launches are conducted on a frequent, recurring basis to ensure the continued reliability of the system. Each test activity provides valuable information about our systems, thus contributing to assurance in our capabilities.

The missile was not armed. Strategic Systems Programs does not routinely announce missile testing. Information regarding the test launch of Trident II (D5) missiles is classified before the launch.”