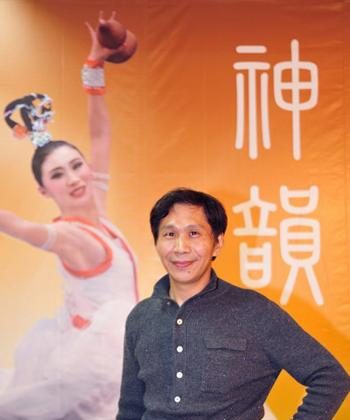 Painter: ‘A bright light for saving the world’

By Helena Zhu and Lih Dawei
Print
TAICHUNG, Taiwan—Renowned Taiwanese nature painter Ho Muhuo has been to various famous mountains, lakes, and monuments to paint pictures with calligraphy and Chinese painting styles. On March 8, he decided to get new inspiration from the New York-based Shen Yun Performing Arts.

President of the Institute of Oriental Painting and Calligraphy, and an art lecturer at the National Chung Hsing University, Mr. Ho saw Shen Yun’s final show at Hui-Sun Auditorium, Taichung and was inspired.

He said that very few performances nowadays manifest the light of life. The “joyful” show allowed the audience members to grasp their true nature and reason for their existence. The dance emitted the light of “truthfulness, compassion, and forbearance. The difference lies in whether one is lost in this world or not. I didn’t realize that I could find the Buddha Law in Shen Yun. Shen Yun brought the Tao into the arts. I think in the future, I will imitate the spirit of Shen Yun, and bring the Tao into my paintings.”

Mr. Ho said that he studies Buddha with devotion. He usually paints to delineate the feelings from his heart. Regarding Shen Yun, he said, “The serenity of nature can only be felt with the soul. The same principle applies to Shen Yun: you need to feel and listen to it with your soul. Then you will hear a call of life. Amidst the joy, I felt that the DPA performance is something undertaken by Heaven, so it’s suitable for all people under Heaven.

“I feel that in this venue Shen Yun is emitting very strong power. My hands and my feet feel electrified. I really have this feeling. There seems to be a huge magnetic field in the theater. So this [show] truly is a bright light for saving the world.”

Upon seeing the finale, Knowing the True Picture Offers Ultimate Hope, he said, “I sense that Buddhas have descended. I think that enlightened beings have arrived in this secular world. When Buddhas and people coexist in one world, Buddhas are people and people are Buddhas. It was such an astounding moment. Usually, we cannot see such scenes because for many people, the world of humans is too far away from the world of Buddhas.”

“It  [The Five Millennia Begin] was very magical. In everyday performances gods and humans don’t have a link. I have never seen such a show. I saw many shows in mainland China, but I never saw anything like this. Nobody else can imagine putting divine beings alongside mankind on the same stage.

“Basically, divine beings are already linked with Shen Yun Performing Arts. The unveiling of the Shen Yun performance equates to a Buddha spreading the Law. That’s why I was touched.”

Mr. Ho said, “That [The Udumbara’s Bloom] truly depicted that Buddhas have descended to the mundane world. It was beautiful.

“Whether inside or outside of China, there are many stage performances.

"However, they only offer a kind of beautiful illusion. The Shen Yun performance is a show that is a part of our lives. In this performance, every one of us is a protagonist. We need to act well and return to our original true selves. Then we will have a bright and hopeful life.”