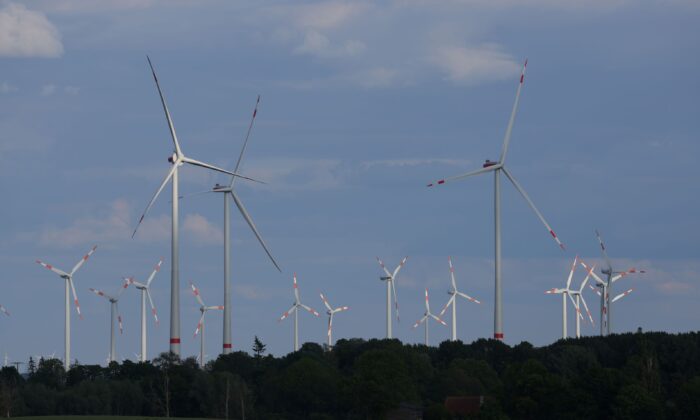 Germany’s grand vision of sun and wind power overnight ending the reign of fossil fuels has been shown for what it is: a pipe dream. (Sean Gallup/Getty Images)
Viewpoints

Sometimes, the significance of a cataclysmic event is not immediately apparent.

The bombing of Pearl Harbor was an event that shocked the world. Many realized—even as it was happening—that it would bring America into a war it didn’t want to be in. But few predicted what would follow. The end of World War II led to a Pax Americana that would not only let the world live in peace but would allow a couple of generations of earthlings to live longer, richer lives.

Unfortunately, that long peace also preoccupied us with less important issues. Navel gazing about which pronouns to use or what a woman is are relatively harmless, but some of our new culture war obsessions are not. Obsessing about race, in a Western world that has never been less racist, is one example.

But that long peace always had a Potemkin village quality, and it hid the fact that we live in a dangerous world containing dangerous people and ideologies. Now, one such man has broken that long, artificial peace. Russia’s invasion of Ukraine has brought us back to reality.

It has also exposed the worst of our navel-gazing obsessions—climate change extremism.

In the natural course of advancing humankind, we will find new, non-polluting energy sources. Amazing new technologies, such as modular nuclear units, will undoubtedly provide the clean energy that the world needs. However, the simplistic belief that fossil fuels are irredeemably evil, and must be eliminated by a date invented by politicians, is doing significant damage. Unfortunately, U.S. President Joe Biden and Prime Minister Justin Trudeau have both accepted this extremism.

However, no country has become so extreme as Germany. How else to describe an otherwise sensible nation in their determination to divest themselves of all fossil fuels and make themselves subservient to Russia and President Vladimir Putin’s push to recreate some twisted Peter the Great version of Russian greatness?

And now Germany’s grand vision of sun and wind power overnight ending the reign of fossil fuels has been shown for what it is: a pipe dream. The $1 billion a day they pay Russia for the fossil fuels they hope will keep them from freezing in the dark this winter guarantees that the slaughter of brave Ukrainians will continue indefinitely.

How will all of this end?

We don’t know. But one possibility is that Russia’s Wehrmacht-style invasion of sovereign Ukraine will begin to bring a soft West back to the basics. Pronouns or the nonsense that a man becomes a woman by declaring himself to be one are unimportant. And no, we are not racists. And most importantly, while we need better, environmentally friendly sources of energy, the reality is that fossil fuels will be here for a long time.

The transition from wood to coal took thousands of years. The transition from coal to natural gas that’s now taking place hasn’t even begun in some parts of the world. It will take generations. And oil is not evil: it’s essential for plastics and many vital products—quite apart from providing fuel.

Fossil fuels are largely responsible—as was the Pax Americana—for making our lives longer and better. The natural gas that Canada has in abundance should be helping Europe to end its dangerous Russian dependence.

But as the protesting farmers in the Netherlands and elsewhere show, citizens are on to the jet-setting politicians and their secret plans to end all fossil fuels on the backs of the ordinary people. Carbon-zero agreements made privately between privileged leaders at Davos, and foisted on a public that would never vote for such extreme measures, will no longer cut it. The public is demanding basic honesty. More turmoil lies ahead.

It’s becoming increasingly obvious that Pax Americana is no longer there to protect us. Europe—and even dependent Canada—will have to get back to the basics. The fossil fuel energy independence and exporting power that has been so recklessly sacrificed must be restored.

The extremists must be shown the door.