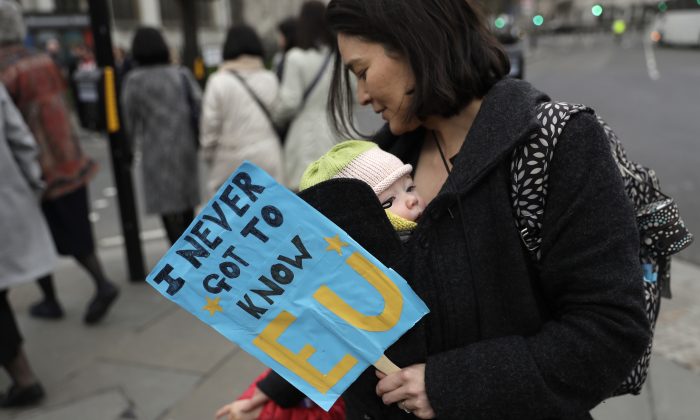 A woman carries a baby and holds a banner as she takes part in a protest outside the House of Commons in central London on March 29, 2017. (AP Photo/Matt Dunham)
International

BRUSSELS (Reuters) – The European Parliament said in a draft position paper on Wednesday that Brexit can be revoked.

The draft, seen by Reuters on the day that Article 50 on Britain’s leaving the European Union was invoked also said there should be transitional arrangements to smooth the divorce but no more than three years.

London-based EU agencies, the European Banking Authority and the European Medicines Agency, must move as soon as practicably possible must move, the draft paper said.

The draft sets the red lines for the elected European Parliament on the conduct of divorce talks with Britain before a trade deal can be discussed.

The recognition by the lawmakers that Article 50 can be revoked was seen as a concession to strengthen the hand of Britons who never wanted to quit, despite opposition from the EU chief negotiator Michel Barnier to making references to the reversibility of the process.

But the document, which needs the approval of the whole legislature next week, made it clear that in case Britons changed their mind they would not get a better deal than what they had so far in their relations with the EU.

The Parliament will have a final say on any deal struck with Britain.

The legislature’s Brexit team, led by former Belgian Prime Minister Guy Verhofstadt, accepted that in case of Brexit there should be transitional arrangements to smooth the divorce, but stressed they cannot last more than three years and should also be “strictly limited” in their scope.

It’s Over: Britain Files for Divorce From the European Union

Negotiations on such transitional arrangements can start only after “substantial progress” is made on a withdrawal agreement that should include a Brexit bill, guarantees for citizens’ rights and legal certainties for companies, the document said.

Britain should also recognize that the European Court of Justice, the EU’s top court, will be the “competent authority for the interpretation and enforcement of the withdrawal agreement”, a statement that may not go down well in London, where many want a quick end of the ECJ powers over Britain.

The Brexit bill should include outstanding commitments to the EU budget and also “provision for off-balance sheet items, contingent liabilities and other financial costs that arise directly as a result of its withdrawal,” the document said, raising the prospect of a tab even higher than the 60 billion euros ($64.5 billion) figure circulated in past week.