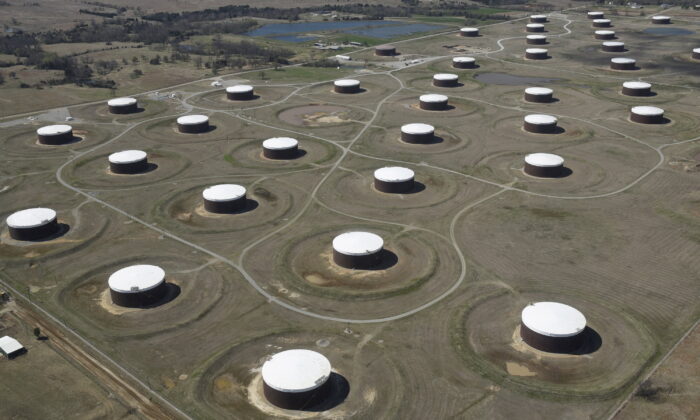 Crude oil storage tanks are seen from above at the Cushing oil hub, in Cushing, Okla., on March 24, 2016. (Nick Oxford/Reuters)
Commodities

Brent crude oil prices breached $139 per barrel in early trade on March 7 due to the possibility of a ban on Russian oil exports as well as delays in a U.S.–Iran deal, which has been further complicated by the war in Ukraine.

The United States, along with European allies, are exploring the option of banning Russian oil imports, U.S. Secretary of State Antony Blinken revealed on Sunday. However, this has to be done while ensuring the global supply of oil remains steady, he added.

Russia’s invasion has resulted in Western nations slapping multiple sanctions on Moscow, disrupting oil supplies from the country. As of January 2022, Russia was the third-largest oil supplier in the world. It is also the second-largest oil exporter behind Saudi Arabia.

Due to the current crisis, roughly 8.2 million barrels per day (bpd) of oil, with seven million coming from Russia, have been disrupted, accounting for eight percent of the global supply.

JP Morgan is predicting crude oil to reach $185 per barrel by the end of 2022. Bank of America analysts see oil prices rising as high as $200 per barrel in case Russian oil exports are cut off as this would result in a shortfall of 5 million bpd in the international market.

Meanwhile, the delay in negotiations with Iran regarding the country’s return to the 2015 nuclear deal is adding pressure to oil markets.

Russia has complicated the issue by insisting that the United States provide guarantees that the sanctions facing Moscow won’t affect its trade with Iran. A top Iranian official has said that the outlook for talks is “unclear.”

“Iran was the only real bearish factor hanging over the market but if now the Iranian deal gets delayed, we could get to tank bottoms a lot quicker especially if Russian barrels remain off the market for long,” Amrita Sen, co-founder of the Energy Aspects think tank, said to Reuters.

Buyers in Asia would be looking for a quick return of Iranian oil supply to the market amidst rising geopolitical tensions, Lim Jit Yang, advisor for oil markets at S&P Global Commodity Insights, said in a report.

Lim predicts a deal between Washington and Tehran to be reached “shortly.” He calculates a full return to the deal to lift production by 750,000 bpd by August in addition to 300,000 bpd of exports from storage.