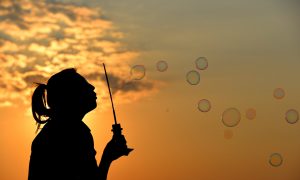 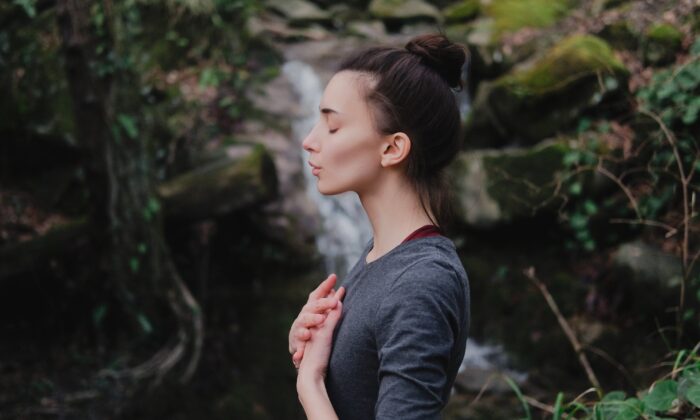 Breath is intimately tied to our state of mind, a fact that can as easily help as hinder us. (Yolya Ilyasova/Shutterstock)
Mind & Body

Breathing is universal, habitual, and nearly always automatic. However, you do have choices about the way you breathe—fast or slow, shallow or deep. This can send messages to your body that affect your blood pressure, immune function, mood, and stress level.

For instance, when you get stressed, your breathing pattern and rate change, often resulting in more chest breathing in response to a fight-or-flight situation. This is triggered by the autonomic nervous system. What’s interesting about the function of breathing is that it’s both a voluntary and involuntary process.

This means that your body breathes automatically, but you also can consciously control your breathing, which is one strategy that has proven effective in reducing physiological stress markers and increasing feelings of calm.

So, simply by changing the way you breathe, you influence your health. This is a strategy taught most frequently in the practice of yoga. Breathing consciously, maintaining awareness and intent on the function, is called breathwork. Yogis have used this technique for centuries as a tool for healing and to relieve physical, mental and emotional stress.

If you have ever watched a baby breathe, you may have noticed they are obligate nose breathers, which means they breathe through their noses except when they’re crying. You may also have noticed that their belly rises and falls with each breath, and not their chest.

One reason this feels unnatural for adults is the impact body image has on your breathing patterns. Women and men find a flat abdomen attractive and many work hard to attain strong core muscles to achieve it. While a strong core is necessary for good posture and to protect your back, it isn’t healthy to hold those strong muscles in while breathing.

This gradually makes chest breathing seem more natural, which creates vertical breathing, so named since as you breathe your chest and shoulders rise. This type of breathing limits the amount of air that gets into the lowest part of the lungs and creates a shallow breathing experience.

Breathing Is Connected to Your Nervous System

The link between shallow breathing and your emotions is found in your neurological system. It is critical that your body engages the fight-or-flight response during emergency situations, but chronic activation is unhealthy. For instance, when faced with running away from a bear or an assailant, your breathing quickens and becomes shallower.

The response begins in the amygdala of your brain, an area of the brain that plays a role in how you handle emotions. It sends a signal to the hypothalamus, which communicates through the autonomic nervous system. This controls your heart rate, blood pressure, and breathing.

These changes happen quickly and without any input from you. However, you have some control over the autonomic nervous system through your breathing. By using controlled breathing, you can calm yourself and create real physiological changes, including:

Diaphragmatic breathing helps correct shallow chest breathing and stimulates the vagus nerve, thereby helping to reduce the effects of chronic stress many experience every day. Americans are no strangers to stress. In April 2019, a headline in The New York Times announced “Americans Are Among the Most Stressed People in the World.”

It was an announcement that likely shocked no one, and yet came slightly less than one year before the COVID-19 pandemic raised stress levels even further. The benefits of controlled abdominal breathing include a full exchange of oxygen and lowering or stabilizing blood pressure.

Healthy Breathing Starts With Your Nose

Before diving into the different breathing techniques you might try, it’s important to recognize that the most basic is to be sure you’re always breathing through your nose. Mouth breathing tends to promote hyperventilation, which decreases the amount of oxygen delivered to your tissue and brain. This can sometimes result in fatigue or lightheadedness.

It also decreases the ability of your body to filter toxic air pollutants and diminishes the levels of carbon dioxide (CO2) in your body. This is important since your body needs a balance of oxygen and CO2 to function optimally. While most of the time, CO2 is recognized as a waste product, it also has biological roles, one of which is helping your body utilize oxygen.

When your CO2 levels get too low, it changes your blood pH, which in turn impairs your hemoglobin’s ability to release oxygen, called the Bohr effect. Nose breathing is a strategy you should also attempt to use while exercising. Although it’s tempting to huff and puff through your mouth, consider reducing your effort until you can breathe through your nose most of the time.

This will only be temporary until your body adjusts to the slight increase in CO2 levels. To achieve this, you’ll have to get used to air hunger, which is an admittedly uncomfortable feeling of mild suffocation. It’s important to realize it’s normal, safe, and helps your body develop a tolerance for increased CO2 that ultimately improves your body’s ability to use the oxygen being delivered to your cells.

Chronic mouth breathing has been associated with several health problems, such as sleep problems and poor dental health, which I encourage you to try box breathing to resolve.

There’s a simple self-assessment you can do at home to estimate your body’s tolerance for CO2. Dr. Konstantin Pavlovich Buteyko, a Russian physician, discovered that the level of CO2 in your lungs is related to your ability to hold your breath after exhaling normally. To do this test you can use a stopwatch or simply count the number of seconds to yourself.

The time you just measured is called the “control pause” or CP, which reflects the tolerance of your body to carbon dioxide. Here are the criteria for evaluating your CP:

To raise your CP, physical exercise is necessary. You might begin by simply walking with one nostril occluded. As your CP increases, consider incorporating more intense exercise to build up an air shortage.

Short CP times correlate with low CO2 tolerance and chronically depleted CO2 levels. As a result, the shorter your CP, the more easily you’ll get breathless. The good news is that you’ll feel better and improve your exercise endurance with each five-second increase in your CP.

Belisa Vranich is a psychologist and author of “Breathe,” a book about using breathing exercises to affect your health. She spoke with a reporter from The New York Times about controlled breathing, saying, “Breathing is massively practical. It’s meditation for people who can’t meditate.”

Dr. Chris Streeter and colleagues published a small study evaluating the effects of breathing exercises on depression and found improvement in psychological symptoms in participants with major depressive disorder.

The team concluded that the intervention “reduced symptoms of depression and anxiety and increased feelings of positivity.” She also spoke to the New York Times reporter: “The findings were exciting. They show that a behavioral intervention can have effects of similar magnitude as an antidepressant.”

Below are five different breathing techniques you may consider that use controlled breathing. You’ll find several more if you read the article “Top Breathing Techniques for Better Health” on Mercola.com.

Choose a quiet place where you can comfortably and quietly do the exercises once or twice a day. Consider using a journal or diary to record your results, because after a couple weeks and different techniques, it may be difficult to remember which works best for you.

This technique is foundational to all the other breathing exercises, so it’s crucial to learn this first since it helps activate your diaphragm and teaches you how to fill your belly with breathing.

Step 1—Begin by relaxing and unbracing your midsection.

Step 2—Take a deep breath in and feel the middle of your body get wider. Let your belly go.

Step 2—Hold your breath for a slow count of four.

Step 3—Inhale slowly to a slow count of four through your nose, keeping your back straight and breathing through your abdomen so your shoulders don’t rise.

Step 4—Hold your breath for a slow count of four and return to Step 1.

This is a technique you can use while under stress. It has the added benefit of engaging your core muscles. Start by sitting up straight and placing your hand on your stomach. As you breathe in, lean forward and expand your stomach. As you breathe out, curl forward and lean backward at the same time until you’ve completely emptied your lungs. Repeat this up to 20 times.

I first learned this exercise when I attended a presentation by Dr. Andrew Weil at the 2009 Expo West in California. Here’s a quick summary of the process. Weil also demonstrates the technique in a video.

Step 1—Sitting straight, place the tip of your tongue up against the back of your front teeth. Keep it there through the entire breathing process.

Step 2—Breathe in silently through your nose to the count of four.

Step 3—Hold your breath to the count of seven.

Step 4—Exhale through your mouth to the count of eight, making an audible “whoosh” sound.

Step 5—Repeat the cycle another three times, for a total of four breaths.

Dr. Joseph Mercola is the founder of Mercola.com. An osteopathic physician, best-selling author, and recipient of multiple awards in the field of natural health, his primary vision is to change the modern health paradigm by providing people with a valuable resource to help them take control of their health. This article was originally published on Mercola.com, visit for sources.