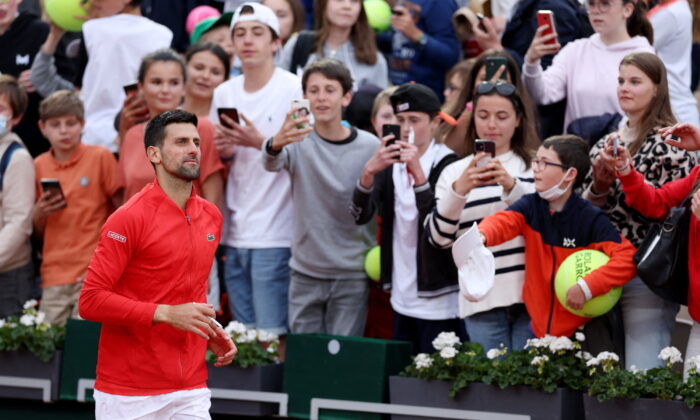 Serbia's Novak Djokovic celebrates winning his second round match against Slovakia's Alex Molcan at the French Open in Roland Garros stadium in Paris on May 25, 2022. (Yves Herman/Reuters)
Tennis

Breakaway PTPA Should Have Been Part of Wimbledon Decision: Djokovic

PARIS—World number one Novak Djokovic said on Wednesday that his breakaway players’ group should have been at the negotiating table when the decision was made to strip Wimbledon of ranking points.

The tennis governing bodies last week took away ranking points from Wimbledon after organizers of the grasscourt Grand Slam decided to exclude players from Russia and Belarus in the wake of Moscow’s invasion of Ukraine.

Djokovic and Canadian Vasek Pospisil stepped down from their positions on the ATP player council on the eve of the U.S. Open in 2020 and started the Professional Tennis Players Association (PTPA) with the aim of better protecting the interests of the players.

The move was met with staunch opposition from the tennis governing bodies, but Djokovic said the PTPA needs to be an integral part of the tennis community.

“We are still a young organization, and it takes time to set up structure in the system. But it will probably take the most time and be challenging for us to really be accepted as part of the system. Right now we are not,” Djokovic told reporters when asked what role the PTPA could have played in negotiations over the ranking points issue.

“We are not in the negotiations table where we should be, because we are not just acknowledged by Slams or anybody else.”

Djokovic will lose the 2,000 points he earned by winning last year’s Wimbledon title and the Serb is among many players who will be affected and could drop down the rankings due to the decision.

The decision to strip Wimbledon of ranking points has been criticized by many players this week, but Djokovic does not expect it to be reversed.

“I just think the system has failed players so many times and that’s the reason why PTPA needs to exist, because when it comes down to this kind of big decisions, a lot of the players’ voices are not heard enough,” he said.