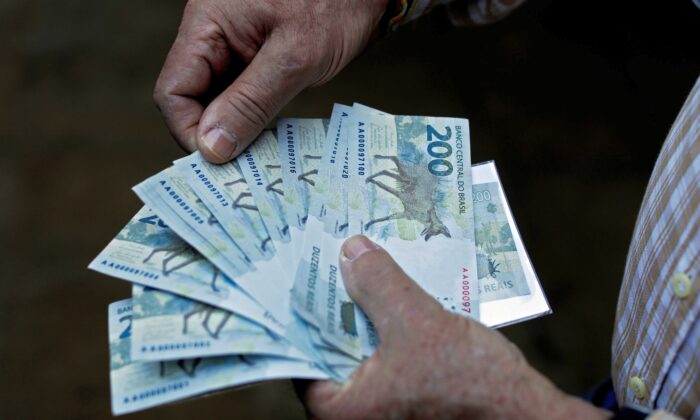 Brazil Suffers Inflation in the Wake of Pandemic Restrictions and Drought

With inflation hitting 10 percent, Brazilians are dealing with significantly higher electricity and food prices, brought about by the economic consequences of pandemic restrictions and a historic drought.

The country’s National Confederation of Commerce of Goods, Services, and Tourism (CNC) published a list of 15 common consumer goods that contributed to the significant inflation rate, which hit double digits as of September this year.

Fabio Bentes, the senior economist for the CNC, told The Epoch Times that inflation is impacting more than just consumer items.

“In addition to the high level of inflation, the composition of general price indices in Brazil, concentrated on significant increases in electricity and fuel, raises the uncertainty as to whether we will overcome this scenario,” said Bentes.

The CNC noted significant price variations in all consumer items in a study released on Oct. 1, with bread being the “most modest” at 20.8 percent. The other items impacted by significant price fluctuations were: toothpaste, milk, soap, pasta, salt, beans, coffee, detergent, wheat flour, washing powder, rice, soy oil, margarine, sugar, and bread.

Based on the inflation rate, prices will hit hard in some of Brazil’s poorest states, such as Piaui and Maranhão. According to the World Bank, the poverty level reached 20 percent by 2016, with the number of people living on less than $1.90 per day surpassing 8 million.  By January this year, poverty rose to 29.5 percent in all but three Brazilian states.

“I feel dread when going to the stores,” Juliana Santos, 41, told The Epoch Times. “The price of electricity and gas is terrible, and now we see it in our food.”

Santos works as a teacher and lives in Rio Branco in the state of Acre, which is another of Brazil’s poorer states. “It was a domino effect bound to happen. The [pandemic] lockdowns came, work slowed, and prices went up.”

Bentes pointed to prolonged drought as another factor having an impact on inflation.

“The water crisis that the country is facing at the moment, the worst in 91 years, will be an obstacle to the pace of economic growth in the coming months,” he said.

Lengthy dry conditions have facilitated the worst drought in central and southern Brazil in almost a century, according to the National Aeronautics and Space Administration. The hydroelectric dams in drought-hit regions generate two-thirds of the country’s electricity. Consequently, electricity prices have risen considerably.

Joao Oliveira, 33, spoke with The Epoch Times about an electricity crisis in the nation’s largest city, Sao Paulo.

“It’s absurd. We’re paying a lot more [for electricity] but we’re also being told not to use so much power,” Oliveira said.

On Sept. 1, Vice President Hamilton Mourão released a public statement saying “there may have to be some rationing” in electricity.

Oliveira said: “We already have energy blackouts [in Sao Paulo]. Electricity prices keep going up, and so is food. How are middle-income people supposed to live?”

In September, the director-general of the National Electric System Operator, Luiz Carlos Ciocchi, said: “For 2022, everything leads us to believe, with enormous uncertainty along the way, that there will be no rationing.”

According to official figures, Brazil showed a steady increase in jobless people between May and November 2020. The Instituto Brasileiro de Geografia e Estatística said the unemployment rate rose to 14.7 percent in the first quarter of 2021.

Diego Alves, 26, lost his job at a restaurant during the first round of lockdowns last year.

Alves said most people he knew had family or friends who became unemployed over the past year.

“You have to make your own work. I fix laptops for cash now. I had to adapt to pay my bills. We all did,” Alves told The Epoch Times.