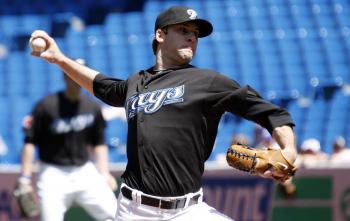 Toronto Blue Jays pitcher Brandon Morrow was one out away from a no-hitter on Sunday against the Tampa Bay Rays. (Abelimages/Getty Images)
Baseball

The 26-year-old right-hander was one out away from accomplishing the feat, giving up a single in the ninth inning. Using a hard fastball and an extremely effective slider over the course of his 137-pitch performance, he struck out a career-high 17 batters while walking two in a 1–0 Jays victory.

The Jays haven’t had one of their own pitch a no-hitter in two decades. Dave Stieb, who pitched one on Sept. 4, 1990 against the Cleveland Indians, is the lone pitcher on the Jays to also pitch a perfect game.

Morrow was apparently not too disappointed with missing out on a no-hitter, and said that pitching his first shutout and complete game are a good consolation prizes.

“Those things combined are more than enough to overcome the missed no-hitter,” he added “That would’ve been a great feat, but I’ll start at a complete game, one-hit shutout with 17 strikeouts.”

The lone Ray to get a hit, Longoria, had words of praise for Morrow.

“If anyone deserved a no-hitter it was him today,” Longoria said. “I mean, it really was one of those days you go up to the plate and really feel like, and I hate to say it, ‘This guy has been making his pitches all day. What chance do we have right now?’”

The Rays Ben Zobrist connected with Morrow’s pitch and hit the ball deep into the left-center field in the sixth inning. Jays center fielder Vernon Wells careened into the wall as he caught the ball, but dislocated his toe in stumbling to the ground.
“They always say there’s one of those plays made when there’s a no-hitter,” said Wells.

Five no-hitters have been recorded this season, and two of them were pitched against the Rays earlier this year.