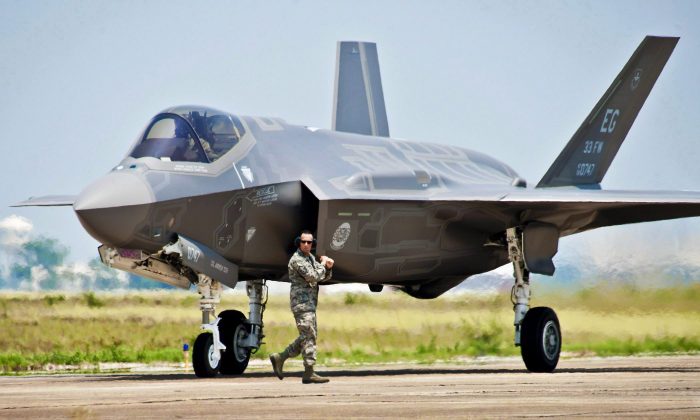 The report, titled “Putting the ‘Armed’ Back into the Canadian Armed Forces,” was written jointly by the Conference of Defence Associations Institute and the MacDonald-Laurier Institute. It was based on over 50 confidential interviews and a workshop with retired and currently serving acquisition officials, political staff, and consultants.

The analysis provides an unvarnished, in-depth look at the system, which has long been beset by delays, cancellations, and cost overruns.

The study also provides a useful benchmark for evaluating the Conservative government’s record on one of its most politically troublesome files as the country heads into an election.

Re-equipping the military … has been a persistent political headache for the Harper government.

While acknowledging successes like the purchase of C-17 heavy-lift and C-130J transport planes, the report found a small number of programs with the biggest price tags—fighters and warships—were the source of most of the problems.

And the researchers assign much of the blame to staffing cuts by both Liberal and Conservative governments in the acquisitions branch at National Defence, as well as new reporting requirements introduced by the Harper government.

The numbers are stark.

There were 9,000 staff dedicated to buying military equipment in the early 1990s; by 2004, over the course of successive Liberal budgets, that number had been slashed by more than half to about 4,200.

After the Conservatives came to power, the number of employees versed in the complex requirements and approval process inched up to 4,355 by 2009, but many positions, especially uniformed ones, remained vacant because of the Afghan war.

“The situation worsened due to the Strategic Review and the Deficit Reduction Action Plan (DRAP), which (cut) 400 positions through the end of 2014/2015,” says the report, which also notes that the cuts took place despite the federal Treasury Board authorizing National Defence to hire more project planners.

“Set against this significantly increased workload, there is simply not enough capacity in the acquisition workforce to manage it.”

Prime Minister Stephen Harper has made a point of urging National Defence to cut backroom administration costs, calling for “more teeth and less tail”—a Conservative mantra that one of the report’s authors calls short-sighted.

“You cannot double someone’s workload and expect things to move in the same way,” said Dave Perry, a senior analyst with the Conference of Defence Associations Institute.

The defence department did very little in the way of major procurements under the Liberals. But once the Conservatives took over, they have tried to push forward some of the most complex programs without any additional staff.

Compounding the problem has been a series of new Treasury Board investment and project management accountability policies introduced by the Conservative government.

“Not only has the number of projects increased over the last several years, the reporting requirements for these capital projects have increased by 50 per cent over the last five years alone,” the study says.

When controversy erupted over the F-35 project and the government’s efforts to buy new fixed-wing search and rescue planes, even more reporting requirements ensued, including a new Public Works secretariat to oversee purchases.

The overhaul of defence procurement last year was hailed by the government as a major step forward to fix the broken system, but the report suggests it could turn out to be a recipe for more delays.

And once there are delays, projects lose their buying power because of the corrosive effect of inflation, which means the military ends up with either few pieces of equipment, or less capable gear, the report says.