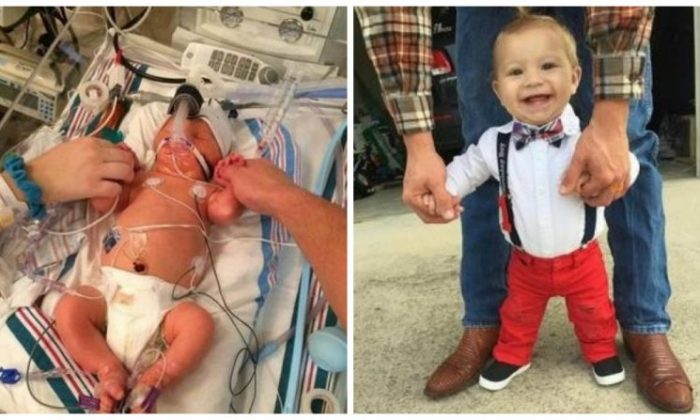 Doctors gave baby Liam Stephenson just a five percent chance of survival when he was diagnosed with bacterial meningitis after being born. Now, he’s celebrating his first birthday.

The boy spent the first month of his life in a neonatal intensive care unit fighting to hang on with dangerous bleeding in his brain. But his loved ones never gave up hope.

Liam’s aunt Jana Blankenship even went on a local television channel last November asking people to pray for her nephew.

“They gave him a 5 percent chance of living,” the aunt told Fox 5 Atlanta, “and if he did he was not going to be able to hear good, talk, crawl or walk.”

After a month at the Erlanger Hospital, Liam was discharged but had to come back 10 times due to seizures. But that didn’t stop the boy from developing.

According to his aunt, Liam has perfect hearing, can say “mamma” and “daddy”, and is well on his way to walking.

“The bleeding on his brain is no longer there,” Blankenship said, “and the seizures have stopped.”

The aunt believes that her 1-year-old nephew is thriving thanks to the prayers from his supporters.

“I would like to believe it was because of you all and those prayers Liam will be celebrating his first birthday,” she said. “God is good, God is great, and may he bless y’all.”

Bacterial meningitis occurs when certain types of bacteria enter the bloodstream and travel to the spinal cord and the brain, according to the Mayo Clinic.

Symptoms in infants include high fever, constant crying, excessive sleepiness or irritability, inactivity or sluggishness, poor feeding, a bulge in the soft spot on top of a baby’s head, and stiffness in a baby’s body and neck.

Infants with bacterial meningitis are often very difficult to comfort and may become more upset when being held.

The infection can be life-threatening and early treatment is advised. If not treated, meningitis can result in hearing loss, memory difficulty, learning disabilities, brain damage, gait problems, seizures, kidney failure, shock, and death.