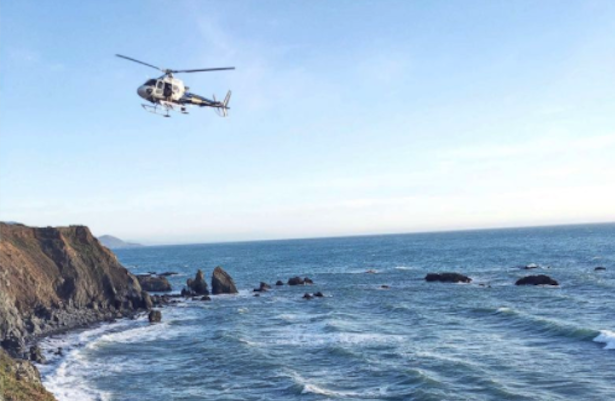 A helicopter hovers at the scene of the crash in which members of the family of Devonte Hart were killed. (California Highway Patrol)
Crime and Incidents

A teen famously photographed hugging a police officer during 2014 protests over the shooting of Michael Brown has been reported missing after several members of his family died in a horrific car crash.

The search continues for 15-year-old Devonte Hart and his siblings, 16-year-old Hannah Hart and 12-year-old Sierra Hart, officials from the California Highway Patrol and the Mendocino County Sheriff’s Office said in a joint press conference on Wednesday, March 28, ABC reported.

Five members of Hart’s family, including adoptive parents Jennifer and Sarah Hart, are confirmed dead after the SUV they were in went off a cliff near Mendocino in northern California on Monday, March 26.

MORE: Devonte Hart, believed to be a victim, drew wide media attention after being photographed hugging a Portland Oregon Police Sergeant during a demonstration over the unrest in Ferguson Missouri – KABC / KGO pic.twitter.com/gWuPkK93lu

A puzzling aspect of the case, authorities said, was the lack of brake or skid marks before the vehicle plummeted 75 feet into the Pacific Ocean, something police called “confusing.”

None of the victims of the crash had their seatbelts on, the authorities revealed, and when crews arrived the car engine was cold, reported ABC.

While investigators remain unclear about the details surrounding the circumstances of the incident, officials said they had “no reason to believe” the crash was “an intentional act.”

Devonte Hart became known when a photo of him hugging a police officer during the Ferguson protests in Portland on Nov. 25, 2014 went viral.

Hart was 12 at the time and carried a sign at the demonstration with the words “free hugs” on it, and the police officer in the photo reportedly walked up to the boy and asked if he could “get one of those.”

According to CNN, Portland police Sgt. Bret Barnum approached Devonte and extended his hand. Barnum reportedly said in a later interview he approached Devonte “not as a police officer but just a human being” when he saw him crying.

Freelance photographer Johnny Nguyen was there to capture the moment.

“The situation itself is something police officers do every day when they go out on the street and make citizen contacts,” Barnum said, according to CNN.

Within hours of its posting on Facebook by an Oregon newspaper, the first media outlet to publish the photo, it was shared more than 150,000 times, CNN reported.

“It solidified what all of us do this work for—this job for—to create good will,” Barnum said of the positive attention the snap received in context of bridging social divides.

Police are still looking for 15-year-old Devonte Hart, who gained widespread attention in November 2014 when a photo of him hugging a police officer during a Ferguson-related protest in Portland went viral. https://t.co/e02BRq54wf

Photographer Nguyen said it seemed to capture a spirit of unity and reconciliation.

“I thought, what a great scene. A powerful scene. A scene with a message that needed to be communicated. A scene of coming together,” he said, according to CNN.

“I knew it had something special, something powerful. It had a message I think everyone wanted to see,” he said.