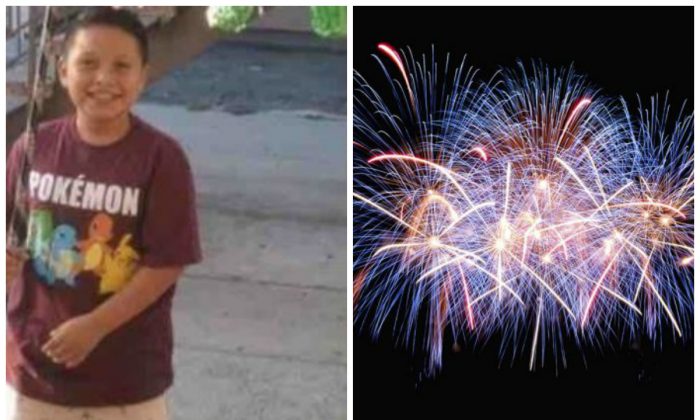 Aaron Carreto, 10, left, was injured when a firework he was handed exploded. On the right, fireworks explode in a file photo. (Aaron’s Firework Accident Recovery Fund/GoFundMe; Jingda Chen/Unsplash)
Crime and Incidents

Boy Loses Arm After Neighbor Hands Him Firework That Blew Up

A 10-year-old California boy lost one of his arms after his neighbor handed him a firework that blew up.

Aaron Carreto was celebrating his birthday in Compton recently when the adult neighbor gave him the firework.

“They lit a firework and then they gave it to me,” Aaron told KABC. “The fuse went down, I looked at it and then it popped in my hand when I was going to throw it.”

Two men were said to be involved; one of them, 27-year-old Walter Revolorio, was arrested and charged with two felonies: child abuse under circumstances or conditions likely to cause great bodily injury or death and possession of a destructive device in a public place.

“I want them to be in jail so they don’t do this to other kids,” Aaron said.

Aaron’s sister, Adriana Carreto, said she’s angry at the two men, noting one is a father.

According to KABC, doctors at UC Irvine Medical Center “stitched [Aaron’s] left arm into his stomach to regrow lost tissue.”

The family started a GoFundMe fundraiser to raise funds for the injured boy.

“On Aaron’s 10 birthday, Saturday, July 6, a terrible tragedy occurred. Around 11 am., my baby brother Aaron was playing outside of our apartment complex, when two older men (our neighbors) approached him with both an illegal and homemade firework. One of the men tossed it to Aaron unexpectedly knowing how dangerous the situation was going to end. The men lit the firework and tossed it towards him, leaving no time for him to toss it away,” Carreto wrote.

“Eventually, Aaron lost all his fingers from his left hand. Also leaving him with burns on his stomach and face (as you can see in the picture.) Aaron was rushed to a nearby hospital ( Long Beach Memorial Hospital ) having an emergency surgery which then led him to, two more. He was later transferred to UCI in Orange. He is currently recovering from four surgeries he’s had so far (with two more in the near future). He lost his left hand completely.”

Aaron’s sister said that the tragedy has changed her brother.

“This incident changed his life, way of living but not his spirits. Everyone knows him as a social butterfly ; always friendly to his teammates on the soccer team. He’s very caring and aware of other people’s needs. He would always ride his bike with his neighbors and kids around the street. He also loved to play fortnite with his classmates during the summer break,” she wrote.

“Now with his new disability he’ll find it difficult to adjust to his day to day lifestyle. He suffers trauma as well as burns and injuries. He tells his family how he feels betrayed by those people around us and wants to start a new life far away from where he grew up.”

The Consumer Product Safety Commission said in a report (pdf) released in June that commission staff received reports of five nonoccupational fireworks-related deaths during 2018. All five victims died from direct impacts from fireworks. More deaths may come to light in future months, the commission said.

In addition to the deaths, fireworks were involved in some 9,100 injuries that led to treatment at hospitals, the commission said.

The parts of the body most often injured by fireworks accidents were hands and fingers (28 percent), legs (24 percent), and eyes (19 percent).