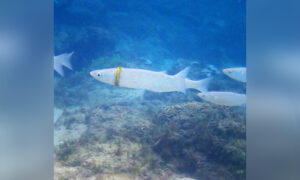 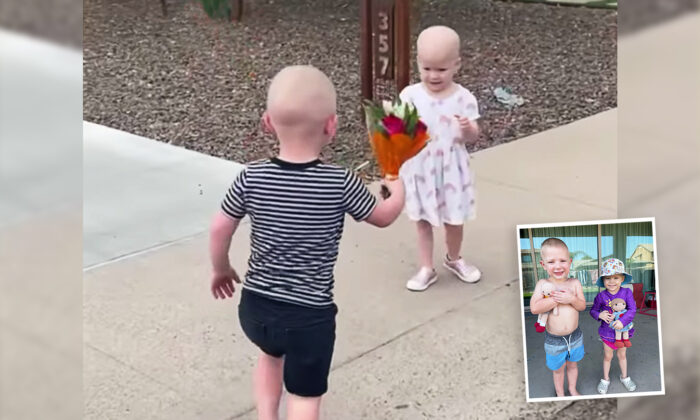 Boy, 3, Gifts Flowers as Toddlers Reunite After Battling Cancer in Hospital Together

A pair of Arizona toddlers who met in a hospital while both battling cancer are warming hearts with their adorable friendship. Two months after being discharged, they have reunited, with a bunch of flowers, a hug, and a whole lot of love for each other.

Mack Porter, the youngest of Danielle and Ty Porter’s four children, was diagnosed with the rare ALK negative anaplastic large-cell lymphoma, stage 3, at 2 years of age. Payson Altice, the only child of Traci Barrett and Chris Altice, was also 2 when she was diagnosed with B-cell acute lymphoblastic leukemia.

Both children were admitted to Phoenix Children’s Hospital for treatment, where they met.

“Payson happened to walk by Mack’s room with a big bouquet of balloons,” Mack’s mother, Dani, told The Epoch Times. “She was having a parade. We later asked if [her parents] would be comfortable with Mack going for a walk with Payson, and then they started playing from there, IV poles and all.”

After leaving the hospital, the 3-year-olds didn’t see one another for two whole months. Despite videos and FaceTime, they were still begging for a play date, so their parents made it happen.

Dani escorted Mack to Payson’s house. Her son, she said, wanted to “take her flowers so they can get married,” but he quickly reassured his mom, “Well, we need to grow up first!”

In an adorable footage of the reunion, which was shared on Instagram, Mack approaches Payson on the sidewalk with a beautiful bunch of flowers. Payson, who has her hands up to her face, lowers them to accept the flowers before giving her friend a big hug.

A separate clip shows the tiny couple dancing together.

People who have been touched with their endearing friendship responded with “tears, hope, and love,” said Dani. “The overall feel of the video is so good. It just feeds your soul.”

Netizens were equally moved by the tiny pair who found true friendship in the midst of their cancer battle. “They’re just too much,” reads one Instagram comment. “Can’t wait to play this at their wedding in 20 years!”

Mack and Payson, said Dani, are very tender with each other. They understand one another, are silly together, and love to show each other their different toys when they get along to play.

When asked by The Epoch Times how Payson took care of him in hospital, Mack, who is “spunky and sweet,” replied that he could “play with her, and be zombies … We like to play hide-and-seek, and dance,” he explained. “She’s my best friend.”

Mack’s parents originally thought their son had contracted COVID-19 when he fell sick just before Christmas 2020. Both Dani and Ty tested positive, Fox 10 reported, but when Mack’s breathing worsened, a chest X-ray showed a large mass in his body. The tumor was then confirmed as cancer.

Family visits to see Mack in the hospital were difficult amid pandemic restrictions. The Porters coped by sharing their son’s journey on GoFundMe in a campaign named “MackyStrong,” set up by a family friend to help with mounting medical bills.

Mack’s story spread, and his community rallied around him.

On March 1, Mack’s third birthday, a fire truck came to collect him and escort him to chemotherapy. The toddler was dressed in a mini firefighter’s uniform, had a tour of the truck, and even got to see a Native Air helicopter, AZ Family reported.

At the time of writing, both Mack and Payson are in remission. Mack still has a large tumor in his chest after six intensive rounds of chemotherapy, but he is cancer-free.

“He is doing very well,” Dani told The Epoch Times.