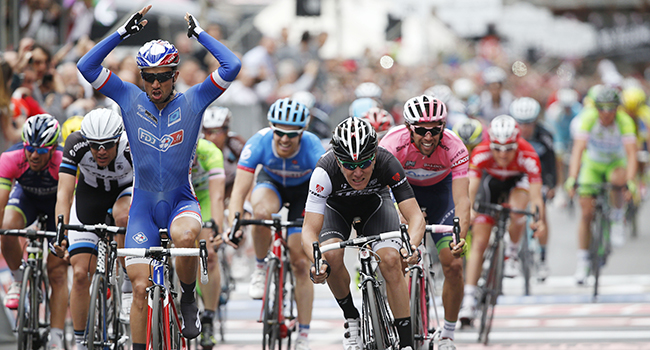 Nacer Bouhanni crosses the finish line to win Stage Seven of the Giro d'Italia cycling race, on May 16, 2014. (equipecyclistefdj.fr)
Cycling

FDJ’s Nacer Bouhanni won his second stage of the 2014 Giro d’Italia Friday, prevailing in the final sprint over Trek’s Giacomo Nizzolo by barely a foot.

After a long hard chase finally caught a five-rider breakaway three km from the finish of the 211-km Stage Seven, Giant-Shimano, riding for their sprinter Luka Mezgec, controlled the front of the peloton, with Bouhanni right behind, and points leader Elia Viviani of Cannondale and Trek’s Giacomo Nizzollo both riding alone.

Mezgec, the only rider with a dedicated leadout, was the first to launch his sprint. Bouhanni waited until the Giant leadout pulled aside, then broke right around Giant’s Luka Mezgec and shot towards the line while Trek’s Giacomo Nizzollo charged past Mezgec on the left. Nizzollo came within half a wheel of catching the FDJ sprinter at the line, but just didn’t have enough.

Mezgec had to settle for third while Orica-GreenEdge’s Michael Matthews finished fourth, preserving his overall lead for one more day. The Orica-GreenEdge rider leads the overall, climbing, and best young rider classifications, but he is likely to lose the overall in the next stage, with two Cat 1 climbs and one Cat 2.

With his second win, Bouhanni, with 166 points, also took the points jersey from Elia Viviani with 139. Giacomo Nizzollo with 150 points moved into second.

“I got into a good position and then in the last meters, I did it,” Bouhanni told beIN Sports. “[At the end] I just made sure I was staying where I should be, but slightly behind, and then I just turned on the maximum in the final. And there you go—we rode down the escape and then I made mine.”