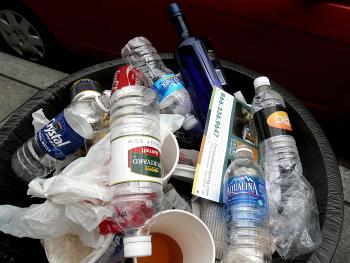 The market for bottled water is huge and growing, as can be inferred by the stacks of cases at this Costco store. But what are customers really buying? (Justin Sullivan/Getty Images)
US

Bottled or Tap—Water Quality in the United States

According to the Think Outside the Bottle Campaign, “Bottled water corporations use clever marketing and misleading advertising that makes people doubt the safety and quality of their own tap water. In reality, bottled water is less regulated than public water systems.”

A study done by the Natural Resources Defense Council (NRDC) in 1999 tested more than 1,000 bottles from 103 different bottled water brands nationwide. It found that one-third of the tested water contained arsenic, synthetic organic compounds, and bacteria—making it no cleaner than tap water.

“There’s much to improve on what’s going on out there today,” said Joe Jajati, the CEO of Skywater.

Having seen some major flaws in the water industry, Jajati started Skywater in 2007. The New York-based company installs home water purification systems that remove chemicals and sediment that are unreachable by most other systems.

Drinking two liters of bottled water adds up to an estimated $1,400 a year. The bottled water industry also burns 47 million gallons of fossil fuels each year to produce its plastic bottles, according to the New York City 2007 Drinking Water Supply and Quality report.

Another 450 million gallons of oil are used each year to transport bottled water.

Several U.S. cities have banned the use of bottled water and large water cooler containers in public sector offices. Illinois was the first state to enact the ban, and just this week, New York also enacted the ban. Such measures have already been enacted in several cities in Canada.

Jajati further explained some of the flaws in bottled water and large water cooler containers. Aside from the cost and environmental impact, another problem is chemicals that leak from the plastic. “I still think you’re better off drinking tap water than drinking out of those five-gallon plastic bottles,” Jajati said, adding that they often sit on trucks in the heat and cold, which further leaks chemicals from the plastic.

In addition to chemicals commonly added to water such as chlorine, phosphoric acid, and sodium hydroxide; trace parts of several other materials also find their way into the water supply, although they are normally too little to be of concern. Among them are aluminum, uranium, sulfate, nitrate, foaming agents, and magnesium.

Water can also gather rust and lead when passing through pipes and fixtures in the plumbing system.

Trace parts from other substances such as medication, vitamin supplements, and makeup can also find themselves in the water supply when washed down the drain, explained Jajati.

The filtration system used by Skywater removes nearly all these substances through the use of four filtration systems, including an ozone cleaning process. In regards to the parts of medication and cosmetics that may find their way into water, “the only thing that’s known to affect these kinds of chemicals is ozone,” Jajati said.

Ozone kills bacteria and viruses 5,000 times faster than chlorine and is 152 times more effective. It converts back to oxygen in a fraction of a second in water, explained Jajati. The ozone system also effectively keeps the water tank free of algae and bacteria

The lack of such a cleaning system is often a major flaw in water tanks, as despite the quality of its filters or the water coming in, the water tank can develop algae and bacteria.

After the ozone converts back to oxygen, it also effectively oxidizes the water, which helps the body to better absorb it. Jajati said that this is an important quality in water. “Drinking distilled water drowns your system because it’s much harder for your body to absorb the water when there’s no oxygen,” Jajati said.

A carbon filter used by the Skywater filtration system removes lead, chlorine, and several others chemicals that dissolve in the water. The other two used by the system are a sediment filter and a lead and cyst reduction filter.

Most companies use only a carbon filter.

"Some companies are reputable and have good machines. Although there are more bad ones than there are good ones," Jajati said.