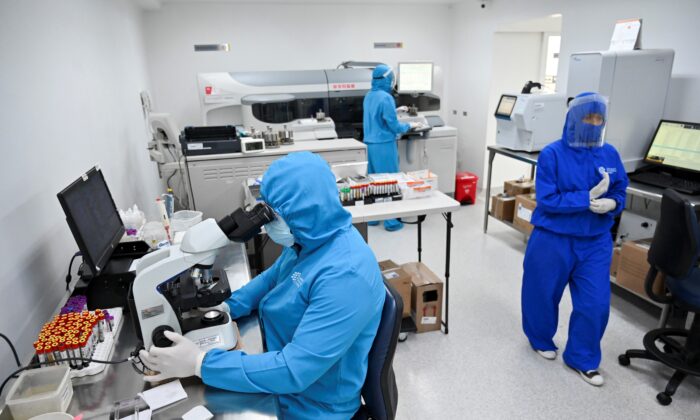 Health personnel work at the COVID-19 area in a file photo. (Luis Robayo/AFP via Getty Images)
By Jack Phillips

Boston University issued a statement Tuesday defending its research of a COVID-19 Omicron strain when they took the variant’s spike protein and attached it to the original COVID-19 strain, leading to a higher mortality rate in a certain species of mice, triggering concern among lawmakers.

One lawmaker, Sen. Roger Marshall (R-Kan.), said that the research entailed “lethal gain of function virus research” that creates the “potential to kill more people than any singular nuclear weapon.” Marshal, a doctor, added that “viruses have managed to escape even the most secure labs” and said such “research must stop immediately while the risks and benefits can be investigated.”

Meanwhile, Emily Erbelding, director of the National Institute of Allergy and Infectious Diseases’s division of microbiology and infectious diseases, told Stat News that the Boston University’s grant application didn’t specify that researchers wanted to perform this work and the group did not say it was performing experiments to possibly enhance a COVID-19 variant. An investigation is now underway, she said, noting to Stat that the original Wuhan strain had a 100 percent kill rate in mice.

Boston University issued a lengthy statement defending its research and said critics have misrepresented the goals of the study while refuting allegations that the study involved gain-of-function research, which can make a pathogen more deadly or transmissible. An update to that statement issued on Tuesday evening responded to Erbelding’s comment by saying the college “fulfilled all regulatory obligations and protocols” and that “there was no gain of function with this research.”

“The research was reviewed and approved by the Institutional Biosafety Committee (IBC), which consists of scientists as well as local community members,” the statement from Boston University said. “The Boston Public Health Commission also approved the research. Furthermore, this research mirrors and reinforces the findings of other, similar research performed by other organizations, including the FDA. Ultimately, this research will provide a public benefit by leading to better, targeted therapeutic interventions to help fight against future pandemics.”

Certain reports about the study were “false and inaccurate,” Boston University official Ronald Corley said in a statement. A report from the Daily Mail, he alleged, took the “80 percent” line out of context.

“We want to address the false and inaccurate reporting about Boston University COVID-19 research, which appeared today in the Daily Mail,” said the statement. “First, this research is not gain-of-function research, meaning it did not amplify the Washington state SARS-CoV-2 virus strain or make it more dangerous. In fact, this research made the virus replicate less dangerous.”

“We take our safety and security of how we handle pathogens seriously, and the virus does not leave the laboratory in which it’s being studied,” he said. “Our whole goal is for the public’s health. And this study was part of that, finding what part of the virus is responsible for causing severe disease. If we can understand that, we can then develop the tools that we need to develop better therapeutics.”

However, one doctor interviewed by the Daily Mail expressed alarm over the research.

“The issue is what you’re going to be using [the labs] for. If they’re for diagnostic purposes, then you need them. But I don’t think every country needs a BSL-4,” Dr. Paul Hunter, an expert in infectious diseases at England’s University of East Anglia, said, referring to the top level of biosecurity used in laboratories.

“If they start having a dual purpose for research that has offensive military implications, that is the concern,” he said.

There has been widespread speculation that scientists at a laboratory in Wuhan, China, contributed to the initial outbreak of COVID-19 in Wuhan. Although Chinese Communist Party officials have officially blamed the emergence of the virus on a wet market in the Chinese city, some U.S. intelligence officials in 2021 said they believe COVID-19 either was created inside the lab or had escaped from the facility.