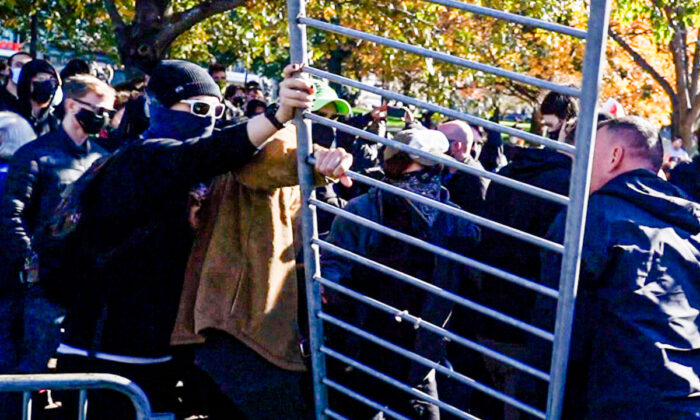 BOSTON, Massachusetts—A rally against mask and vaccine mandates in Boston was disrupted by “anti-fascism” protesters on Nov. 7. According to Boston Police, two individuals were arrested as clashes broke out between the two sides.

Police officers with clubs and anti-riot gear quickly reacted and divided the two groups. After that, the “anti-fascism” protesters marched to another side of the park and broke through barrier fences. Not long after that, riot control officers assembled and began to clear the field.

The brief conflicts on Sunday concerned many of the rally-goers. One participant, Kevin Mackie, who held a sign that read “see people not sides,” was worried about “people blinded by hate, calling names and dehumanizing each other.”

“I think we need to be diplomatic. We need to be respectful of each other. Listen to each other. Remember, at the end of the day, no matter what sides people are on, they are all human beings,” Mackie told The Epoch Times.

He said that people are taking different sides because they disagree on how to achieve the common goal of keeping everyone wanted to be safe and free. Therefore, he said it is important to “look at the rationale behind everybody’s thought.”

“Each of us is unique. We all have a unique mishmash of what we believe in. To distill it into two sides is really reductionist. And it’s not productive, it’s not the way out,” Mackie said.

The protest was organized by Super Happy Fun America, “a right of center civil rights organization focusing on defending the Constitution,” according to their website. Their rally began around noon with a heavy police presence.

About 100 attendees sang the national anthem, read the pledge of allegiance, and shouted slogans like “we will not comply” and “USA.”

At the same time, a larger crowd of protesters congregated on the other side of police fences with communist flags and signs that read “death to fascism.”

As the anti-mandates rally went on, the “anti-fascism” protesters tried to dismantle the barricades and rush into the rally. A few physical altercations ensued.

The Boston Police Department said in an email that two persons were arrested.

Racioppi said he was right by the van when the incident happened. He also said he was pepper-sprayed by the other group of protesters.

Super Happy Fun America said in an email that “Antifa” smashed the windshield and started beating the van and driver, forcing the driver to desperately try to escape by driving through barriers.