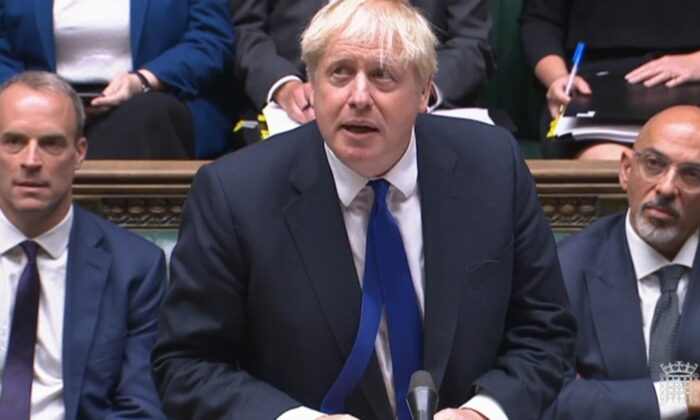 In his resignation speech, British Prime Minister Boris Johnson said he was reassembling his Cabinet as many as 59 government ministers and ministerial aides have quit in recent days.

However, one Conservative MP said he was worried that not “all ministerial posts can be filled.”

As he gave his resignation speech on Thursday, Johnson said that “he has appointed a new cabinet to serve as I will until the new leader is in place.”

“I’m giving up the best job in the world,” said Johnson, saying that it was “painful” to give up the job of prime minister but he said nobody was “indispensable.”

Among the new cabinet posts announced were  Kit Malthouse as Chancellor for the Duchy of Lancaster, replacing the fired Michael Gove, and Greg Clark as Levelling Up Secretary. Andrew Stephenson has also been appointed Minister without Portfolio.

Robert Buckland is Welsh Secretary and Shailesh Vara has been given the Northern Ireland Secretary role.

Yesterday newly appointed Chancellor Nadhim Zahawi called for Johnson to resign, less than 48 hours after taking on his new role.

Newcastle-under-Lyme MP Aaron Bell told Sky News he was worried that not all ministerial posts can be filled.

“I think it’s important that we have all those ministerial positions there.

“I also think the last 48 hours, his refusal to accept reality has done a lot of damage to trust in the institution as a whole in parliament, in conventions that we have in the Conservative Party, that when the game’s up, the game’s up, and unfortunately it took a long time for the Prime Minister to realise that.”

When the Herd Moves

In his resignation speech Johnson said: “In the last few days, I tried to persuade my colleagues that it would be eccentric to change governments when we’re delivering so much and when we have such a vast mandate and when we’re actually only a handful of points behind in the polls, even in midterm after quite a few months of pretty relentless sledging and when the economic scene is so difficult domestically and internationally.

“I regret not to have been successful in those arguments and of course it’s painful not to be able to see through so many ideas and projects myself,” he added.

“But as we’ve seen, at Westminster the herd instinct is powerful, when the herd moves, it moves,” said Johnson.