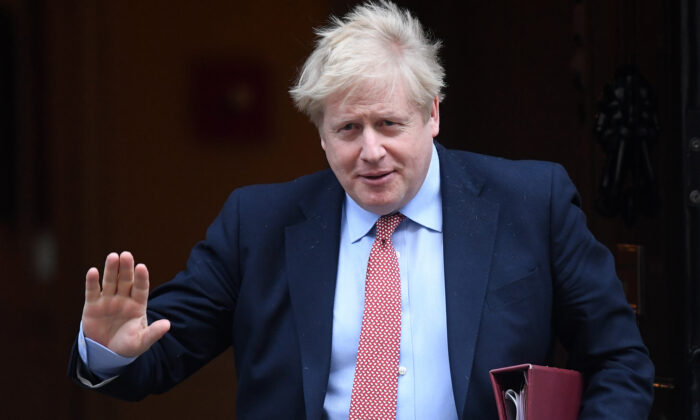 Johnson, 55, is being treated for COVID-19, the disease caused by the CCP (Chinese Communist Party) virus, commonly known as novel coronavirus. He was taken to an intensive care unit on Monday before being moved out of the unit on Thursday.

“The Prime Minister has been moved this evening from intensive care back to the ward, where he will receive close monitoring during the early phase of his recovery,” Downing Street said in a statement.

Johnson, the top official in the United Kingdom, is perhaps the highest-profile active virus case in the world.

Diagnosed last month, Johnson was hospitalized this week after suffering persistent symptoms including high temperature and a cough.

COVID-19 manifests similarly to the flu but, according to early statistics, is deadlier in some groups of people, especially the elderly and infirm.

While Johnson was in an ICU for three days, he was never on a ventilator.

About 80 percent of patients who go on the breathing machines end up dying, according to data from New York hospitals.

“Things are getting better for him,” his culture minister, Oliver Dowden, said. “He’s stable, improving, sat up, and engaged with medical staff.”

“He is still in intensive care but he continues to make positive steps forward and he’s in good spirits,” Foreign Secretary Dominic Raab added at a press conference.

Johnson was still in “good spirits,” according to Downing Street.

Johnson is being cared for at St. Thomas Hospital in London.