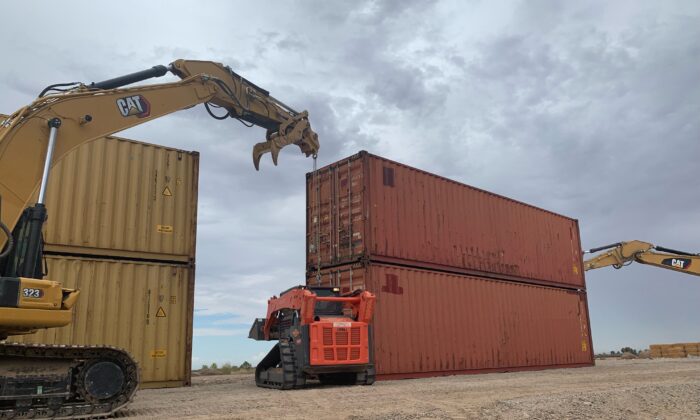 Shipping containers are used to fill a gap in the border wall with Mexico near Yuma, Ariz., on Aug. 12, 2022. (Arizona Governor's Office via AP)
By Tom Ozimek

Arizona has started to dismantle its makeshift border wall made of shipping containers that was championed by former Gov. Doug Ducey but faced opposition from newly minted Gov. Katie Hobbs and was the target of a Biden administration lawsuit.

Footage taken on Jan. 3 shows construction machinery removing a line of shipping containers placed along the U.S.–Mexico border in Yuma, Arizona, which coincided with the day that Hobbs was sworn in as governor.

Ducey, who in mid-December agreed to dismantle the wall for which he had once been an ardent advocate, ordered the disassembly of the makeshift barrier as one of his final acts in office.

He said earlier that the container wall was always meant to be a temporary construction intended to help stem the tide of illegal border crossings until a permanent solution could be found.

That figure broke the previous record by more than 1 million and was more than twice the highest level notched during the tenure of former President Donald Trump, who made stemming illegal immigration a key part of his platform with his signature slogan, “Build the Wall.”

Hobbs, who on Jan. 3 became the first Democrat governor in Arizona in 16 years, had been critical of Republican Ducey’s border wall, labeling it as ineffective political grandstanding.

“It’s a political stunt. It’s a visual barrier that is not actually providing an effective barrier to entry, and I think a waste of taxpayer dollars,” she told Arizona radio station KJZZ in a recent interview.

“The containers aren’t working. There’s many pictures of people climbing over them,” Hobbs said.

While Arizona has begun dismantling its makeshift border barrier, a similar one is going up in nearby Texas, whose Republican governor has, like Ducey, been frustrated by the surge in illegal crossings.

In a bid to bolster border security, Texas Gov. Greg Abbott has called in the National Guard to run razor wire barriers in high-traffic areas and recently said shipping containers were being used to plug more holes.

‘Arizona Has Had Enough’

Ducey, an outspoken critic of Biden’s border policies that he has blamed for the surge in illegal immigration, issued an order in August 2022 to plug gaps in the U.S.–Mexico border wall near Yuma, which has become one of the busiest corridors for unauthorized crossings in the country.

“Arizona has had enough,” Ducey said in a statement at the time.

“We can’t wait any longer. The Biden administration’s lack of urgency on border security is a dereliction of duty. For the last two years, Arizona has made every attempt to work with Washington to address the crisis on our border.”

Yuma County Sheriff’s Office deputies have said that the containers have helped prevent illegal immigrants from crossing into the United States.

“Our deputies have noticed traffic is slowing down,” one of them told KYMA-TV.

But the makeshift border wall prompted first a warning from the Biden administration and then a lawsuit.

Later, Arizona was hit with a lawsuit for allegedly placing the containers on federal lands without permission, with the U.S. Department of Justice filing a complaint (pdf) on Dec. 14, 2022.

Ducey’s office repeatedly said the barrier was supposed to be temporary and would be taken down once the federal government acted to bolster border security in the area.

The Department of Homeland Security (DHS) announced in July 2022 that it had authorized the filling of gaps in the border wall near Yuma, prompting Ducey spokesman C.J. Karamargin to say that “from our perspective, the shipping container mission is a success.”

On Dec. 21, 2022, Arizona state and federal authorities reached an agreement to remove the makeshift barrier.

Court documents filed in the U.S. District Court for the District of Arizona (pdf) show that Ducey’s administration agreed to dismantle the containers and remove the equipment, materials, and vehicles used to install them by Jan. 4.

Ducey previously insisted that he had the right to defend the state of Arizona and protect its citizens, with his office describing the number of illegal crossings as “ominous” and threatening to overwhelm border communities.

Environmentalists denounced the makeshift wall as harmful to local wildlife.

The work of placing up to 3,000 containers at a cost of about $95 million was about a third of the way complete.

Republicans have long accused Democrats of advocating for an open-borders policy, even though the Biden administration has repeatedly denied this claim.

Fiscal year 2023 is on track to break last year’s record of illegal crossings, with both October 2022 and November 2022 setting records in their respective months for the number of illegal alien encounters.