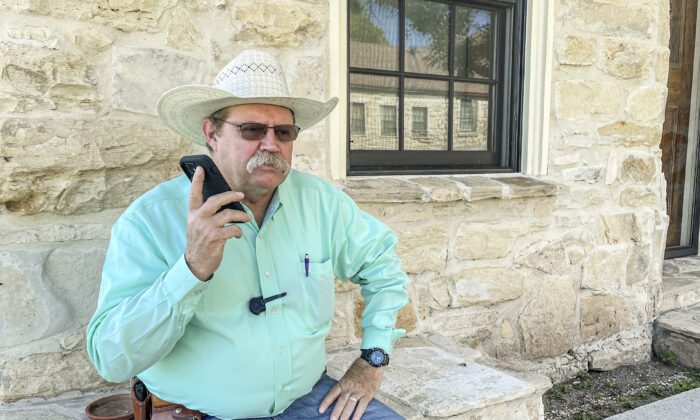 BRACKETTVILLE, Texas—Days after a militia made its presence known in a rural Texas town, the county sheriff said he received a call from a Texas Department of Public Safety (DPS) official who threatened to pull all its resources from the county.

Kinney County Sheriff Brad Coe said that during the call, the official said they “didn’t know who these people were” who were wanting to come help on the border.

“He basically said, ‘I’ll pull all my resources out,'” Coe said.

Coe said he understood the call to mean that all state troopers assigned to the county would be relocated, and other resources including jail space could be made unavailable to Kinney County if militia personnel were operating in the county, even on private ranches.

“I said, ‘They’re not working for me. They’re not deputized. They’re just here on their own accord. And they have that right to be here,'” Coe told The Epoch Times.

Sam Hall, leader of the militia Patriots for America, said the group planned to operate as a deterrent in areas of high traffic.

“As a militia, we can’t detain or arrest people. We can disrupt and frustrate until the county or DPS can get there,” Hall told The Epoch Times.

Border Patrol agents recorded almost 4,000 illegal aliens who evaded capture in the Del Rio Sector in the seven days from Oct. 18, according to provisional Customs and Border Protection numbers provided to The Epoch Times. Most have to pass through Kinney County to get from the border cities of Del Rio and Eagle Pass to San Antonio.

Coe said he had spoken to Hall and requested to know where they’d be operating, for safety purposes. The sheriff said he understood the concerns DPS might have of a “friendly fire” incident if they don’t know where people are working.

DPS has had a significant impact in Kinney County since the governor’s Operation Lone Star border enforcement effort began in March, especially with the extra state troopers on the roads arresting human smugglers and on the ranches apprehending illegal aliens for trespassing.

It’s not the first time DPS has threatened to pull back.

Rancher Cole Hill figured he was being proactive when he invited four men onto his ranch to help guard the property against trespassers one night in September. He was fed up with the constant illegal alien traffic, damage to his property, and slow (or no) response from overwhelmed law enforcement agencies.

The men ended up detaining a group of seven illegal alien men for DPS to subsequently pick up and charge with trespassing.

The next day, Hill told The Epoch Times, he received a phone call from DPS.

“Almost verbatim it was, ‘Look, you can’t do that. That’s not even legal what you guys did. That’s technically kidnapping. You cannot do anything to impede the travel of any other human being. And if you do so, if you try to detain somebody against their will, that is kidnapping, and you can be charged with kidnap for that,'” he said.

Hill said the DPS officer told him that they will no longer come to his ranch to pick up detained illegal aliens because it would reflect badly on the agency to transport illegal aliens that had been “technically kidnapped.”

Hill’s ranch sits about 35 miles from the U.S.–Mexico border on a main thoroughfare for illegal immigrants who have evaded Border Patrol and are traversing his land on foot to skirt a highway checkpoint. The usual plan is to then be picked up by a smuggler who will drive them to a big city, often San Antonio.

Hill said he’s dealt with illegal aliens traversing his land for years, but only about 25 people a year, on average;  sometimes months would go by with no activity.

Since then, he’s had men in full camouflage clothing on his front porch; a group surrounding his house, banging on the walls and peering in the windows; his ranch worker house broken into; and his truck ignition destroyed during a theft attempt.

“Sure, there’s probably some good apples in there as well. But I don’t think the good apples are 35 miles off the river trying to evade every law enforcement they can as aggressively as they are,” Hill said.

He said he’s lost count of the number of confrontations he’s had with groups of five or six men while working alone on his ranch. The idea of having a group of men out on security one night seemed appealing.

“All they were doing was giving me a better night’s sleep,” he said.

He was shocked to get the call from DPS.

Kinney County Attorney Brent Smith said ranchers have been detaining illegal aliens for years for Border Patrol and the sheriff’s office to pick up.

“No one’s ever brought this issue up until now with DPS,” Smith told The Epoch Times.

“Any citizen can arrest someone, or detain them, for breach of peace or a felony committed in their presence. And trespassing has been found to be a breach of peace before.”

Smith said that most of the time when a group of illegal aliens is walking through a ranch, one of them is the guide, or coyote, which constitutes a felony.

“So one of those guys is committing a felony. Can you detain all 10 of them until you find out who that one is? How do you know which one the guide is unless you detain them?” he said.

DPS didn’t respond to multiple requests for comment by The Epoch Times about this incident and about whether the agency has warned other ranchers in Texas that they could be charged with kidnapping.