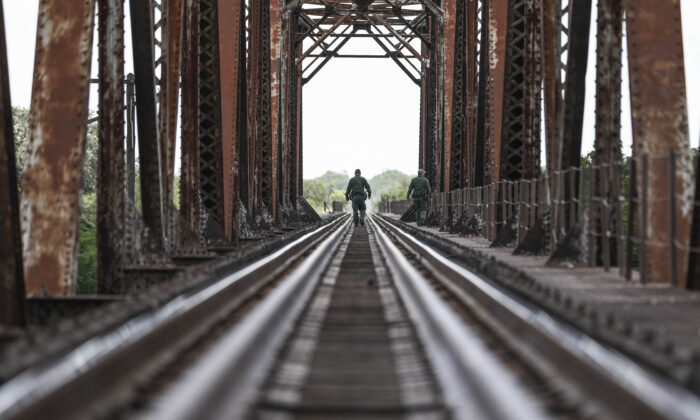 Morale among Border Patrol agents has plummeted to an all-time low as they struggle to process unprecedented volumes of illegal immigrants, while knowing they’re unable to secure the border against cartel activity. Many blame their own leadership for enabling it.

“Day after day, they just look like they want to eat their gun,” an agent told The Epoch Times, referring to some local agents in the Rio Grande Valley Sector, who he says are bearing the brunt of it. “They just look like hell. It’s hard to put it—you just start seeing the life leaving people’s faces.”

The agent, Jose (not his real name), spoke to The Epoch Times on condition of anonymity for fear of repercussions.

U.S. authorities have apprehended more than 1.5 million illegal immigrants since January, according to Customs and Border Protection (CBP) data.

“It’s a very, very hopeless feeling for the Border Patrol,” Jose said. “Of course, we’re all still doing our jobs as best we can. Nobody is giving up, but it’s definitely more of a hopeless feeling just in general.”

During August, the average daily number of illegal immigrants in Border Patrol custody along the southwest border was just shy of 10,000, according to CBP. Agents are spending most of their time processing illegal immigrants rather than being on the front line along the border.

“None of us signed up to be secretaries for these family units coming in,” Jose said.

Border Patrol agents have been especially overwhelmed in the two busiest sectors—the Rio Grande Valley and Del Rio in Texas.

In one week in September, border agents scrambled to deal with an influx of nearly 15,000 mostly Haitian illegal aliens in Del Rio alone. The effort left highway checkpoints closed and hundreds of miles of the U.S.–Mexico border unpatrolled.

“If we went back to actually doing our jobs, it would be amazing,” Jose said. “But right now, the common thought on this is that we’re just aiding and abetting illegal aliens—furthering their illegal activity. Many border agents are spending the majority of their time taking care of the humanitarian needs of illegal aliens rather than out on the border stopping criminal activity.

“And that’s not what any of us signed up for.”

The Biden administration has said it’s concentrating on the “root causes” of illegal immigration and views it as a race issue.

“Immigration, we consider, is part of racial equity—which is a broad issue, but that’s how the president has spoken about that crisis over the past several months,” White House press secretary Jen Psaki said in the early days of the Biden presidency.

President Joe Biden was quick in January to dismantle many of former President Donald Trump’s border security measures, which, along with his campaign rhetoric, has resulted in record surges of illegal crossings this year.

The president tapped Vice President Kamala Harris in March to address the growing border crisis, and she has since traveled to Central America and Mexico to discuss the issue with leaders from those nations.

Harris was outspoken against Border Patrol and ICE agents (comparing them to the KKK) in 2019 during the last surge of illegal immigrants, and again in 2020, when specialized border agents were deployed to Portland, Oregon, to defend a federal courthouse from Antifa and other rioters.

“We knew Kamala Harris didn’t like us in the very beginning. She attacked us, called us storm troopers … in Portland, and she hated us and we knew it,” another agent, Alex, told The Epoch Times, on condition of anonymity.

“So then, she becomes our vice president and is now a border czar of the very agency she hates.

“From top down, when you have complete leadership that fundamentally does not like you; when you have agents that you don’t know if they’re working for the cartel; if you have half of America that thinks you’re the enemy and you put kids in cages and kill them, all because of propaganda, it weighs on you.”

Alex said his children are bullied at school because he’s a Border Patrol agent.

“They’re asked if I kill kids, put kids in cages,” he said. “The border encompasses everything. So that’s why it weighs down. Because I have to think my choice to be a Border Patrol agent is negatively impacting my family’s emotional state and well-being as well. So that’s also a pretty heavy weight.”

He said it’s not a simple fix to find another job. He’s not prepared to get the COVID-19 vaccine at this stage and federal agencies are mandating it. Border Patrol agents have until Nov. 22 to be fully vaccinated or else face being fired. Several agents The Epoch Times has spoken to fall into that category. Some are submitting their retirement paperwork, while others are counting the days until they’re eligible. Agents can retire at age 50, but often stay on until mandatory retirement at 57.

“We’re not making any difference. Zero, nothing. I always say, today’s turnback is tomorrow’s gotaway,” Alex said, referring to illegal aliens that turn back to Mexico before being apprehended and those who get away from Border Patrol and enter the United States.

Then-head of the Del Rio Border Patrol Sector Austin Skero said on June 24, as illegal immigration continued to escalate: “None of us really feel good about the current situation we’re in. So it has taken a toll on morale. Our agents are frustrated. They’re frustrated, but they’re highly motivated.”

Department of Homeland Security Secretary Alejandro Mayorkas’s three-part plan to address illegal immigration is to invest in the countries that people are leaving, to build “safe, orderly, and humane pathways” for migration, and to rebuild the asylum system and refugee program. So far this year, illegal immigrants have hailed from more than 160 countries.

Border Patrol Chief Raul Ortiz said in a June 24 community meeting in Del Rio that the agency’s focus is to streamline the processing of illegal immigrants.

This year, the administration released hundreds of thousands of illegal immigrants into the United States with a notice to appear, which indicates the scheduled date of their immigration court case.

However, the border agencies got so swamped that agents were directed to speed things up by handing out a “notice to report,” which is a request for the illegal immigrants to check in with Immigration and Customs Enforcement (ICE) within 60 days.

It’s unclear how many subsequently reported to ICE. The Epoch Times has submitted a freedom of information request for that data, but hasn’t received a response.

On Oct. 8, the Biden administration announced its intention to cancel existing border fence contracts in the Rio Grande Valley and Del Rio border sectors. Harris, in 2019, had called Trump’s border wall project his “vanity project” and the surge of illegal aliens an “emergency of his own creation.”

During the last crisis in 2019, Border Patrol agents were accused of running state-sanctioned concentration camps and putting “kids in cages” at the overwhelmed facilities along the border.

The Border Patrol agency took a hit in morale at the time, but this year is much worse, agents say.

“We’re not securing the border anymore. We’re not fighting the incursion, we’re just rolling over and taking it. It’s just being a secretary. It’s not fixing anything, it’s not helping America.”