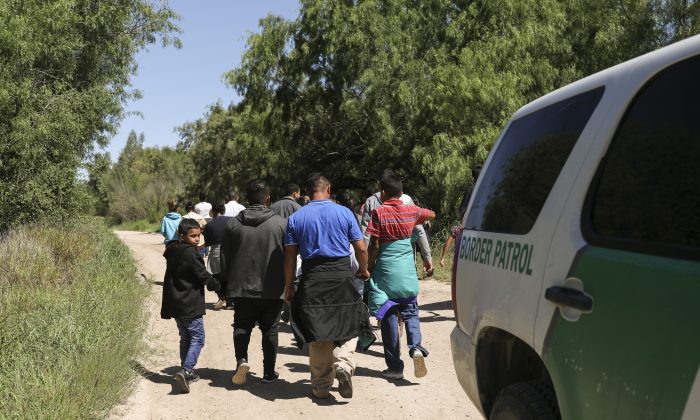 A group of illegal aliens walk up the road after crossing the Rio Grande from Mexico. Further up the road, they will be processed by Border Patrol and then board a bus bound for the Border Patrol processing facility in McAllen, Texas, on April 18, 2019. (Charlotte Cuthbertson/The Epoch Times)
US News

Border Patrol: ‘Kids Are Being Rented’

DEL RIO, Texas—A 1-year-old baby that a Honduran man tried to pass off as his child—to gain a quick release from Border Patrol after illegally crossing the border—was not his.

The man was caught only through the vigilance of Border Patrol agents. By regulation, biographical information on children under 14 isn’t taken.

“You can walk through any of our processing centers and you can see that there are potentially parents, or adults with children, that there may not be a familial relationship,” said Raul Ortiz, Border Patrol chief for Del Rio, Texas. “There’s probably many more cases like that happening across all nine southwest border sectors on any given day. Really, if you think about it, it’s human trafficking.”

In 2014, fewer than 1 percent of all men apprehended by Border Patrol in the Rio Grande Valley Sector had a child with them. That number now sits at 50 percent, according to Rodolfo Karisch, chief Border Patrol agent for that sector.

The number of family units crossing illegally has skyrocketed since a judge in California reinterpreted the Flores Settlement Agreement in 2015 to now say that any child, including those with parents, can’t be held longer than 20 days. Previously, that law had only applied to unaccompanied minors. Twenty days is not long enough to adjudicate an asylum case, so with the system overwhelmed with sheer volume, family units are being released within a few days.

The vast majority are from Honduras, Guatemala, or El Salvador.

“Make no mistake about it, the word is getting out: if you are part of a family, if you bring a child, you will be released,” Karisch said at a Senate hearing on April 9.

He said Border Patrol recently intercepted a text message from an MS-13 gang member who was part of a fraudulent family unit.

Karisch read out the message: “You should see the amount of Hondurans that are traveling with a child. And they pay less to the smugglers in order to be delivered to the Border Patrol. And it’s a direct trip. They have them a few days with Border Patrol and afterwards, they are released. There are a lot of people with that law. That is the easiest way right now. Entire families are coming.”

On April 18, in the Rio Grande Valley, a group of 35 illegal aliens was apprehended by Border Patrol. One woman, who said she was five months pregnant, said her husband and their daughter had crossed on a different day as a separate family unit.

Families are now using that tactic so that everyone is released quickly, said Carlos Ruiz, Border Patrol agent in the Rio Grande Valley.

‘We’ve Missed Many, Many More’

In the Yuma, Arizona, sector, an average of three fake families are discovered every day.

In the past six months, Yuma Border Patrol agents have detected 550 fraudulent family units, according to Sector Chief Anthony Porvaznik.

“And we know we’ve missed many, many more, simply because we’re overwhelmed with the sheer numbers,” Porvaznik said on April 17. “And so those are kids that are being rented, for lack of a better word, to an adult to format a fraudulent family unit so that they can be released in the United States and then that child will be recycled back to its country of origin—usually Guatemala, in our case here in Yuma.”

The Yuma sector has become the third busiest in the nation for illegal crossings, but the Rio Grande Valley still dwarfs Yuma’s numbers by four times.

Porvaznik said another problem is adults who are getting their birth certificates altered to indicate they’re juveniles—making it much easier to be released into the United States, either as part of a family unit or as an unaccompanied minor.

“So there’s a huge fraud problem that’s going on with this process,” he said.

He said he has started a pilot program that allows Border Patrol to collect biometric data of a child under 14, if the adult with the child consents. A rapid-DNA pilot program is also starting, but it’s very expensive and limited in scope, Porvaznik said.

“It’s hard to put that into play right now. So, what we’re relying on are fingerprints and photographs. And interviews that agents do of the kids,” he said.

“Our agents do a great job with trying to detect [fraud], but the problem is, is when we have 1,000, 1,100 people in custody, really our goal is to get those people processed … we need to move those people out of our custody.”

Immigration and Customs Enforcement (ICE) announced on April 29 that it is sending agents and experts to the border to “investigate child smuggling and document fraud used to exploit family immigration loopholes.”

If an adult is found to have an unrelated child with him or her, the child is then processed as an unaccompanied minor, Ruiz said.

“We work together with the consulates. They usually help us find a family member here in the United States, or the mother or father back in their home country,” he said.

He said that sometimes, the parents have willingly given their children over to be part of a fake family unit, other times not. Sometimes, the smuggling groups will match an unaccompanied minor with an adult to pass as a family unit—ostensibly charging the adult extra.

“These kids are being trafficked through multiple countries and put through terrible conditions,” Ortiz said. “If we don’t do something to stop this, if we don’t make a stand on the border security and immigration problem right now, there’s going to be more of these kids that are going to be subjected to some serious harm.”