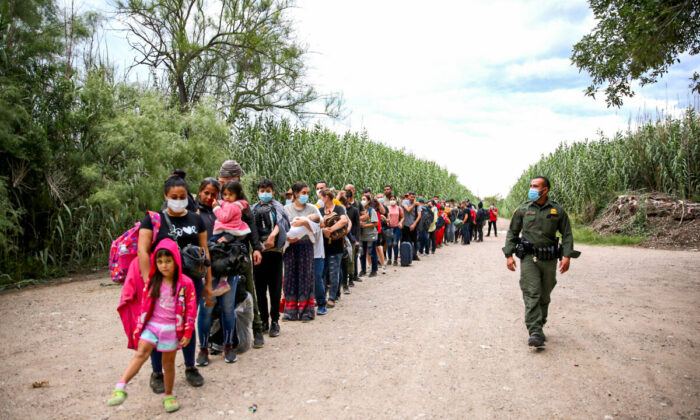 Border Patrol agents apprehended a total of 1,666,167 illegal immigrants along the southwest border in fiscal 2021—breaking all records since the agency was formed in 1925 (when 22,199 illegal aliens were arrested).

An additional 294,352 were stopped after trying to enter at a port of entry without legal papers, bringing the total to almost 2 million (1,956,519) for fiscal 2021, according to new Customs and Border Protection (CBP) statistics.

The CBP doesn’t officially release the number of “gotaways”—illegal aliens who are detected by Border Patrol but evade capture. However, former CBP Commissioner Mark Morgan told a congressional Republican roundtable on Oct. 20 that the gotaway number hit at least 400,000 illegal aliens this year.

The Biden administration has faced growing criticism for the crisis at the southern border, which started to ramp up a year ago in tandem with election rhetoric.

The number of illegal crossings then shot up once Biden took office and promptly dismantled many of President Donald Trump’s border security measures. In January, Biden paused deportations, stopped border wall construction, halted the Remain in Mexico program, repurposed Immigration and Customs Enforcement priorities, and reversed the ban on travel from terror-prone countries.

In December 2020, Trump’s last full month in office, Border Patrol agents arrested almost 74,000 illegal immigrants on the southern border. By July, that had almost tripled to 213,500.

The Department of Homeland Security (DHS) is expelling most single adults under the Title 42 health directive policy issued by the U.S. Centers for Disease Control and Prevention in March 2020 that calls for immediate expulsion of all illegal immigrants and non-essential travelers.

However, under Biden, the DHS stopped applying Title 42 to any unaccompanied children, most family units, and some adults.

The administration has been faced with record levels of unaccompanied minors and family units entering illegally—most of whom are subsequently released into the United States.

The number of unaccompanied children apprehended by Border Patrol in fiscal 2021 (146,925) exceeded last year’s total by four times. At one point in April, more than 20,000 unaccompanied minors were being held in Health and Human Services custody.

The White House confirmed on Oct. 20 that it has been flying unaccompanied children from the southern border to New York in the middle of the night.

“It is our legal responsibility to safely care for unaccompanied children until they can be swiftly unified with a parent or a vetted sponsor,” White House press secretary Jen Psaki said. “And that’s something we take seriously. We have a moral obligation to come to do that and deliver on that.”

She confirmed that unaccompanied children also are being transported to other parts of the country.

The administration subsequently released at least 12,400 of them into the interior, with the expectation that they would check in with Immigration and Customs Enforcement (ICE) or turn up at their immigration court hearing.

Tens of thousands more Haitians and other migrants are currently heading toward the U.S. border, according to reports.

During the Haitian crisis, Border Patrol was forced to close nearby highway checkpoints, and state and local law enforcement surged to the bridge to provide security.

In general, drug seizures at the border and highway checkpoints have been consistently lower in fiscal 2021 than in the past three years, with September hitting a low point.

Other issues are facing the Border Patrol agency, with morale hitting an all-time low and agents facing a Nov. 22 deadline to get vaccinated with a COVID-19 vaccine or be fired.

The Biden administration has been consistent in its response to questions about its handling of the border, saying it’s focusing on the “root causes” of illegal immigration and that it’s seeking a “fair, orderly, and humane” immigration system.

Administration officials have avoided calling the border issue a crisis, but DHS Secretary Alejandro Mayorkas was caught on leaked audio telling border agents that the situation is “unsustainable.”

“A couple of days ago I was down in Mexico, and I said look, you know, if, if our borders are the first line of defense, we’re going to lose and this is unsustainable,” Mayorkas said on Aug. 5, according to audio that a Border Patrol source leaked to Fox News.

On Oct. 21, Biden was asked by Anderson Cooper during a CNN town hall whether he plans to visit the southern border.

“I guess I should go down. But the—but the whole point of it is: I haven’t had a whole hell of a lot of time to get down,” Biden said.

Vice President Kamala Harris visited El Paso, Texas, in June, but was criticized for avoiding the two busiest sectors in the nation, also in Texas.