Border Deception: How the US and UN Are Quietly Running the Border Crisis

'Human trafficking every step of the way' 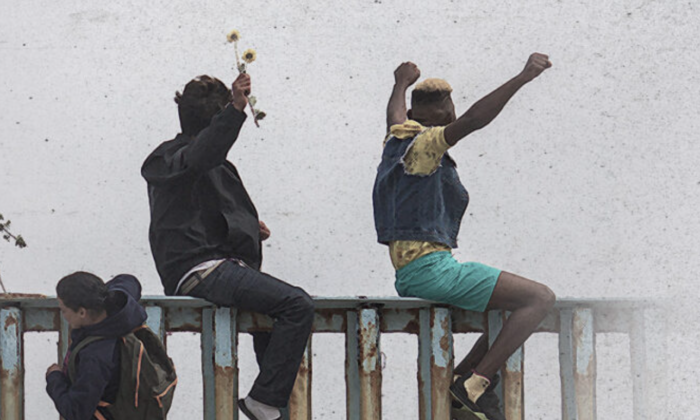 An EpochTV special report entitled “Border Deception: How the US and UN Are Quietly Running the Border Crisis” reveals that what Americans are being told about the border crisis is an illusion.

In the report, which aired Sept. 29, Joshua Philipp, editor and senior investigative reporter for The Epoch Times and host of the EpochTV segment “Crossroads,” uncovers alarming details about what is really happening at our nation’s border.

Philipp says his investigation found “a coordinated effort, with the cooperation of foreign governments, financing from the United States, and a pervasive program being run by various NGOs and the United Nations, to facilitate human trafficking every step of the way, all through Central America, up through Mexico, and into the American heartland.”

Philipp begins his investigation at the mouth of the Rio Grande, as he interviews noted war correspondent Michael Yon. Yon says he’s been tracking migrants worldwide. He explains that many immigrants must get through the cartels to get to Mexico, often crossing multiple countries’ borders in a dangerous trek.

Yon makes it clear that the human rights crisis is real. But are the cartels facilitating the crisis, as many believe? Since the migration journey often begins in Colombia and Panama, and sometimes even further south, it’s clear that governments in each country are involved in pushing migrants northward. Is this a coordinated effort, and what is the motive?

Who Are These Immigrants?

Retired Marine Corps officer Tim Lynch, a resident of Roma, Texas, tells Philipp that in the past, the illegal immigrants coming to his town were families claiming asylum. Eventually, border agents recognized the same children reappearing every week. In response, agents began separating the families and doing DNA tests, finding that 30 percent of the children did not belong to those crossing with them.

Lynch comments that everything happening at the border involves politics. The expectation is that illegal immigrants will reliably vote Democrat, he says. If they were expected to vote Republican, the Democratic Party would ensure they were kept out of the country.

Local rancher Blake Ward tells Philipp he recalls illegal immigrants coming to his house when he was a child, asking for water. He recalls that they were humble, in need, and always looking for work. Now, the immigrants approach him multiple times a week and often display demanding and entitled behavior as they ask for food and demand to charge their phones. These are very different from the immigrants who had holes in their shoes, had clearly made a long trek, and were truly in need. Now, the immigrants are well-dressed and even appear to be profiting from what they do.

Philipp found that these immigrants are assisted by charity groups, which is not surprising.

But how can charity groups cover such high costs? If law enforcement is passing immigrants to charities, is it through a legal agreement? Who pays for it? Is this a local issue or something bigger?

To find more answers, Philipp interviewed Sherrif Brad Coe of Kinney County, Texas. Coe says that crime from illegal immigrants, including human smuggling cases, takes up his entire manpower each week. His department is kept busy catching immigrants and handing them over to buses that transport them further into the country. NGOs pay for the buses, but he is kept in the dark about the organizations to which he has to pass the immigrants.

How Are the US Government and the United Nations Involved?

The EpochTV episode features Wisconsin Congressman Tom Tiffany, who has been personally investigating the border crisis. Tiffany has accused the federal government of running a human trafficking operation. He explains that one of the first things President Joe Biden did after his inauguration was get rid of the Trump era “remain in Mexico” policy, begin what is known as “catch and release,” and end border wall construction.

As a result of these policies, millions of people come over the border illegally. Tiffany says it is evident that the U.S. government, at the behest of the Biden administration, is facilitating illegal immigration. Its behavior sends a signal to the rest of the world that has put illegal immigration “on steroids,” and incentivizes people to come to the United States illegally.

The IOM website states that refugees arriving in the United States are offered interest-free travel loans, with funds furnished by the State Department. Immigrants are to repay this debt within a specific timeframe. However, collection of the payback is left to the NGOs.

“American taxpayers are financing the mass migration into the United States, including for operation costs and for direct payments to the migrants,” says Phillip. “The money is going through various NGOs which are involved in resettling refugees. The United Nations, meanwhile, is facilitating the migration into the U.S. under the guidance of the State Department.”

Next, Philipp investigates whether the massive number of asylum cases is legitimate. The United States can’t keep track of these cases, and it’s unclear how the U.N. can ensure repayment for the immigrants’ expenses.

Auden Cabello, Real America’s Voice correspondent, explains to Philipp that there are two types of migrants: those who qualify as asylum seekers and those who do not. Haitians, Cubans, and Venezuelans cross the border and turn themselves in so they can claim asylum. They want to get arrested so they can be processed.

Many of these migrants carry papers saying that they have lived in Mexico for a lengthy period of time. These papers allowed them to travel freely in Mexico without being arrested and deported. However, once the migrants reach the border, they discard those papers, not wanting Border Patrol to know they’re coming from Mexico and have been living there for a long time, perhaps long enough to have permanent residence. These immigrants want to say they are coming from their country of origin and that they were being persecuted there, so they can claim asylum.

According to Cabello, NGOs teach and direct migrants how to accomplish all of this. The funding for this comes from the U.N., NGOs, and Catholic charities, he says.

Cabello says that Border Patrol is so busy processing people that employees of the Department of Public Safety (DPS) are the ones who receive the illegal immigrants and turn them over to Border Patrol. The National Guard watches and does not intervene. In the past, these immigrants would be turned over to U.S Immigration and Customs Enforcement (ICE), but ICE is so overwhelmed that it is not housing or deporting illegal immigrants anymore.

Philipp visits a popular border crossing, examining discarded documents and finding flyers with the U.N. logo. Cabello walks him through the process, showing how immigrants come from the Mexican side, cross, change into dry clothes, and walk to DPS, where they are held until Border Patrol comes.

Cartels: Not the Main Players

Philipp says that cartels—which “we’ve been told are the main players”—are playing a much smaller role than Americans have been told. They may profit from immigration and human trafficking along the way, but they have little presence in much of the actual border crossing. Migrants cross, turn themselves in, and apply for asylum in order to be shipped directly into the nation’s heartland.

“Border Patrol and law enforcement have become the funnels for the NGOs running this operation. And even more so, the people crossing are getting paid money to do this. And that money is coming out of the pockets of American taxpayers,” says Philipp. Many migrants, as the interviews reveal, intentionally hide their country of origin and discard their identities to defraud the amnesty system.

Why Is the American Public Being Deceived?

“Our investigation uncovered that the border crisis reality is a United Nations operation being financed by the U.S. government, with the goal of moving and resettling migrants throughout the United States,” Philipp concludes. “The open policy, along with the financial incentives, is drawing people in by the hundreds of thousands.”

This EpochTV episode will leave viewers wondering about the real motive behind these detrimental policies and asking why the American public is being deceived about what is actually fueling the border crisis.

Watch “Border Deception: How the US and UN Are Quietly Running the Border Crisis” on Epoch Cinema here.

Emily Allison
Emily is a writer for The Epoch Times and a freelance political journalist. With an extensive background in Political Communication and Journalism, she is committed to serving her country by bringing the truth about important issues of the day to the American people.