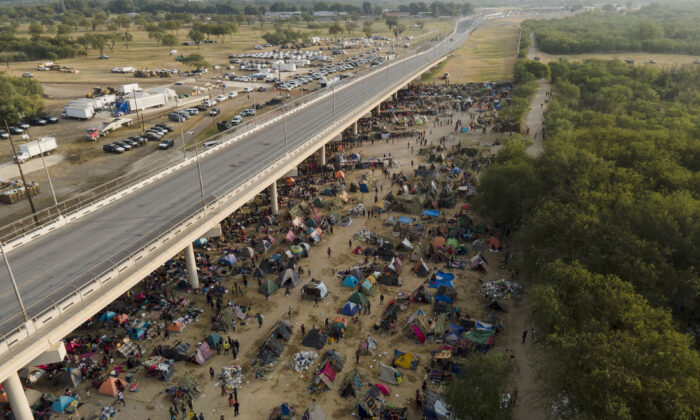 Illegal immigrants, many from Haiti, are seen at an encampment along the Del Rio International Bridge near the Rio Grande in Del Rio, Texas, on Sept. 21, 2021. (Julio Cortez/AP Photo)
Viewpoints

An increasing number of citizens are unhappy with the way President Joe Biden is handling the border crisis—and for a good reason. The southern border appears to be highly porous.

According to a recent Gallup poll, 56 percent of those surveyed disapprove of how Biden is handling his job as president. The Gallup report noted, “Biden’s low job approval rating stands as a significant threat to the Democratic Party’s chances of maintaining its slim majorities in the U.S. House of Representatives and Senate.”

This is because “unpopular presidents’ parties” tend to lose seats in midterm elections, “with the number of seats lost usually much higher for presidents with job approval ratings below 50%.”

According to another poll carried out by academics at Quinnipiac University, Biden’s approval rating now sits at 33 percent. When it comes to his performance as president, Americans are unhappy for a number of reasons. For example, inflation is a genuine cause for concern, and 81 percent of U.S. adults are worried that a recession is just around the corner.

Right now, the current administration is failing to control the U.S.–Mexico border.

To quote Tom Tancredo, an American politician and author, “To be called a sovereign nation, a nation has to be able to control its own borders.”

Although it’s almost 2,000 miles long, the border only has 700 miles of fencing.

According to a recent poll conducted by Harvard’s Center for American Political Studies (CAPS), the average registered voter believes Biden is mishandling immigration; only 32 percent of respondents declared support for his approach to immigration. The president fared a little better on the economy, crime, and foreign affairs, drawing 33 percent approval.

Why are people so unhappy with Biden’s immigration policies?

It’s pretty simple. It’s because the policies to date have been highly ineffective. Last year alone, 1.7 million unauthorized migrants crossed the border. This year is expected to be just as bad.

A recent New York Post editorial also highlighted how the border crisis contributes to the country’s growing drug problem. As the authors noted, “This poison flows into the country through our porous southern border via the trafficking efforts of Mexican cartels using Chinese raw materials to synthesize the drug.”

Events at the border have even prompted The Washington Post—the same paper that asked Americans to go easy on the president just a few months ago—to criticize Biden. In April alone, the paper published two scathing pieces criticizing the president’s approach to immigration. When papers known for publishing pro-Biden pieces start publishing critical takedowns of the president, it’s safe to say things are bleak indeed.

Things, as they say, can only get better. With the border crisis, however, they could get much worse. As I write this piece, the Biden administration is actively considering rolling back Title 42, which currently allows Customs and Border Protection to turn migrants away at the border, preventing them from filing for asylum. The strict approach was introduced by Donald Trump during his time in office.

In an effort to prevent the reversal of Title 42, as The Texas Tribune recently reported, Ken Paxton, the attorney general of the Lone Star State, has taken legal action against the Biden administration.

According to the lawsuit, the “Biden Administration’s disastrous open border policies and its confusing and haphazard COVID-19 response have combined to create a humanitarian and public safety crisis on our southern border.”

Millions of Americans appear to agree. According to Morning Consult, 56 percent of registered voters oppose the decision to lift Title 42. If reversed, at least 125,000 refugees will be admitted into the country, the global data firm reported.

This leaves us with just one question: Will Title 42 actually be lifted?

It appears that it will. However, Paxton’s lawsuit could prove to be a defining moment in the saga. A game-changer, if you will. Whether Paxton is successful or not, we will have a definite answer in less than a month.