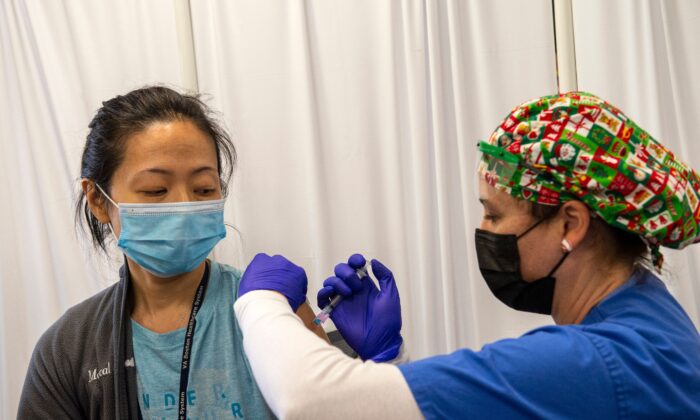 Our government—the current administration and its president—is now announcing that those who took COVID-19 vaccines must take a booster.

But who can trust the opinion of our government—any part of it, all those self-perpetuating enclaves of moribund bureaucrats—given what’s going on in Afghanistan? It’s laughable.

It’s not just the “gang who couldn’t shoot straight.” It’s the “gang that shoots its own people” and leaves millions of women to suffer the most brutal oppression on the planet.

That this booster announcement was made now, in the face of the monstrous Afghanistan debacle, is an all-too-transparent attempt to say don’t look there, look here—here being, as always, COVID-19, the ever-ready pandemic that has been used to manipulate and prevent the American people from living anything close to normal lives for going on two years.

In fact, as I type, our president has suddenly appeared on our television screens talking about COVID-19 and advocating boosters with not a word about the thousands on death’s door across the seas, and he doesn’t—needless to say—take a single question.

Or, to paraphrase the John Huston/Bogart classic “The Treasure of the Sierra Madre,” “Boosters? I don’t want your stinkin’ boosters!” (It was “badges” in the original.)

The Pfizer jabs apparently no longer really work. They have worn out early, like a set of tires before their time.

The booster is supposed to alleviate this, but how many boosters? One every six months? Every three months? Weekly?

Which variant will it prevent—the Delta, the Lambda, the Delphic Oracle?

No matter. According to three extraordinary—and brave under the circumstances—doctor/scientists whose briefing for some members of the Tennessee legislature I attended via Zoom last week, the Pfizer booster, at least, doesn’t even work against the Delta variant.

Reason: The Pfizer booster is just more of the exact same vaccine that people took in the first place and was never designed for Delta, which didn’t exist at the time.

But … but … but … what if one is invented for Delta? Well, the gentlemen said, it would be pointless. The Delta variant itself will be gone in roughly a month and a half, moving on to the next one, Lambda and so forth, as viral variants almost always do.

So what to do if we abjure the essentially useless vaccine? (They cited Israel, where nearly everyone is vaccinated, and the country is in the midst of a renewed epidemic.)

Make sure to take plenty of vitamin D and C and zinc daily. Have either hydroxychloroquine (Trump was right about this one, the vaccines not so much) or ivermectin on hand and a doctor who can instruct you on the protocols, maybe get you a monoclonal infusion or some Regeneron if you should contract COVID-19.

Time is the most important thing to beat the disease. If you have symptoms, get tested immediately and, if positive, begin treatment as soon as possible. If you react quickly, you will almost always be okay and avoid the much-talked-about “long-haul COVID.”

As for masks, they pointed to Japan, where 98 percent of the population wears them and the pandemic is as widespread as anywhere else. (Don’t tell that to esteemed Nobelist in medicine New York Mayor—for now—Bill de Blasio.

And who were these doctor/scientists whose advice runs counter to the Centers for Disease Control and Prevention, Dr. Anthony Fauci, and our president?

One was Dr. Robert Malone, the inventor of the core technology behind mRNA vaccines. (How could he know anything?) A fascinating talk on his discovery by Malone reveals how, and how long ago, it happened.

The other was Dr. Ryan Cole, a dermatopathologist from Boise, Idaho, who advocates for individuals rights to decide what they put in their body, just like we did in the ’60s (“Our bodies, ourselves.”)

The third was Dr. Peter McCollough, one of the most renowned cardiologists and epidemiologists in the world at the Baylor University Medical Center in Dallas and who is called, along with Cole, one of the Paul Reveres of our time.

You can listen to his testimony before the Texas Committee on Health and Human Services. It told me more about COVID-19 and its treatment than I have ever learned from Fauci, or from anyone else for that matter.

Not surprisingly, all three of these gentlemen are under constant attack by the traditional (read: governmental) medical establishment. McCollough is even being sued by Baylor, his alma mater, in an attack on scientific free speech by the university that’s reminiscent of Galileo and the medieval church.

The doctor had an interesting answer about how his colleagues reacted to his apostasy, even though it was governed by patient research and the data.

He said he saw fear in their eyes, fear that he might be right.

This reaction tracks with what I, and I would imagine many others, have experienced over the last few years in their relations—work, friends, and family—in any number of areas of social and professional life.

There’s good reason Tucker Carlson says at the end of his nightly show that he’s the enemy of “conformity and groupthink.”

We all should be.