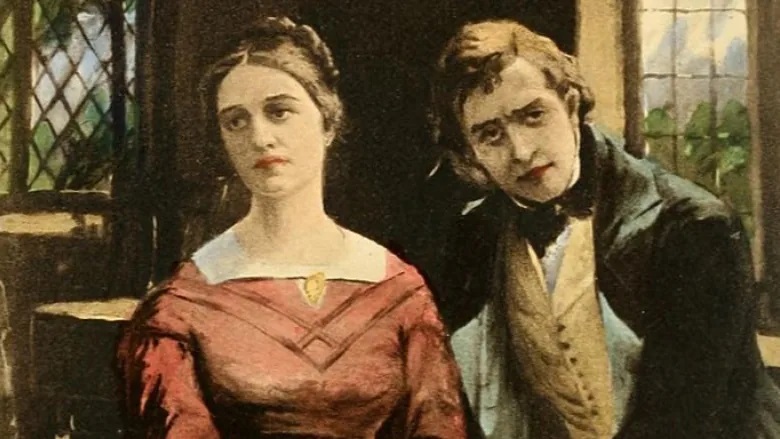 Dorothea Brooke and Will Ladislaw from "Middlemarch" by George Eliot. Will, a headstrong idealist, is in love with Dorothea, one of the novel’s main characters, but he keeps his feelings secret. This illustration is from the book, which was published by The Jenson Society, 1910. (Public Domain)
Books

I recently met up with one of my literary friends. We both like to read and discuss books. At one point, he shared with me that he’d read Tolstoy’s “War and Peace” three times. “I liked it that much,” he said.

Tolstoy’s novel was published in 1869 and came in at more than 900 pages. George Eliot’s novel was published in 1872 in four volumes, and depending on which version you’re looking at, also came in at more than 900 pages. My friend and I are fairly prolific readers. Most novels these days come in at an average of 350–400 pages. Tackling more than that takes a die-hard reader. But I suspect that many of you would be up to the challenge.

As you probably know from your high school days reading “Silas Marner,” George Eliot is a pen name for Mary Ann Evans. This author was a maverick. She wanted to be taken seriously in the literary world, so she took on a man’s name. Many of her contemporaries were writing fluffier, fairytale romance pieces, and she didn’t want to be pigeonholed with them.

Escape to the English countryside and specifically to the town of Middlemarch in the early 19th century. Eliot presents readers with a cast of characters representing all classes of English society, from landed gentry and clergy to farmers and laborers with businessmen in-between.

There are dozens all vividly described. You can picture them as remarkable portraits of the English a century ago. And you can hear each of them through her wonderful and sometimes poignant dialogue.

Whether they are in a drawing room or library or in the garden, their discourse reveals their personalities and how they feel about a myriad of topics ranging from art, religion, science, and politics to more personal feelings about their self-identity, society, and navigating complex human relationships.

One character whom readers will meet early on is Edward Casaubon. He’s a rather dusty, dry, pompous scholar who is working on a lengthy project that he calls “The Key to All Mythologies.” The main heroine, Dorothea Brooke, is much younger than he, intelligent and full of naïve idealism. She sees in him a brilliant mind. He sees in her an adoring secretary. He’s also jealous and controlling. Will this marriage survive?

The other main characters are Tertius Lydgate, who is the new passionate and progressive young physician who has come to town, and Rosamond Vincy, touted as one of Middlemarch’s finest choices for a wife. She is no doubt pretty but lacks his passion. She’s uninterested in his work and has expensive tastes. Will this marriage survive?

Eliot doesn’t shy from the romantic notions of the day. She weaves them deftly into her narrative. Consider Lydgate’s reaction when he first meets Rosamond.

“Lydgate was almost forgetting that he must carry on the conversation, in thinking how lovely this creature was, her garment seeming to be made out of the faintest blue sky, herself so immaculately blond, as if the petals of some gigantic flower had just opened and disclosed her, and yet with this infantine blondness showing so much ready, self-possessed grace.”

However, much as the characters may be initially smitten with ethereal imaginings, Eliot’s novel is a realist work. She doesn’t shy away from life’s disappointments. Hers is not a fantasy world. It’s real world with all the complexities that make up human interaction: the failings and the triumphs, the moments of exasperation and those of serenity and hope. She details the realities of marriage with keen psychological insight, something that many women writers were not doing at that time.

“Marriage, which has been the bourne of so many narratives, is still a great beginning, as it was to Adam and Eve, who kept their honeymoon in Eden, but had their first little one among the thorns and thistles of the wilderness. It is still the beginning of the home epic—the gradual conquest or irremediable loss of that complete union which makes the advancing years a climax, and age the harvest of sweet memories in common. Some set out, like Crusaders of old, with a glorious equipment of hope and enthusiasm and get broken by the way, wanting patience with each other and the world.”

Her portrait of a small, early 19th-century town is rich and rewarding. Colorful and sometimes humorous, her characters often struggle against a background fraught with class rules, tradition, and prescribed behavior.

The reader’s sympathies will shift as characters evolve.

Eliot invites readers in over and over again in “Middlemarch.” Her descriptions of the countryside are lush. Her rooms are inviting. Her characters are engaging and when meeting her characters, readers will find themselves liking them, disliking them, and ever altering their perspectives on them.

Consider that Middlemarch was published in 1872. It is a tome, perhaps a tome for all times. Written 150 years ago, its themes are very much relevant today.

I can’t say that I’ll read it more than once. Yet, I suspect in a re-read that more will be gleaned from this great Victorian novelist who may not have savored happily ever after endings but certainly knew how to craft an insightful and compelling read.