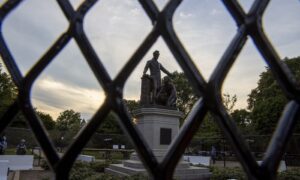 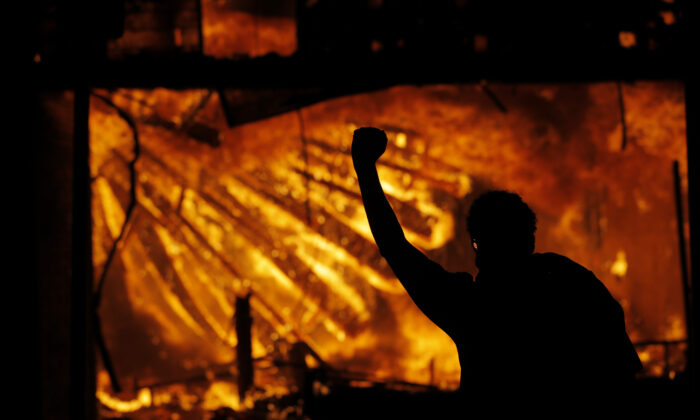 A protester gestures in front of the burning 3rd Precinct building of the Minneapolis Police Department in Minneapolis, Minnesota, on May 28, 2020. (Julio Cortez File/AP Photo)
Crime and Incidents

A Texas man claiming to be a member of the Boogaloo Bois, an anti-government extremist group, faces federal charges of plotting to incite a riot as prosecutors say the man opened fire on a Minneapolis police precinct amid protests in the wake of George Floyd’s death.

Ivan Harrison Hunter, a 26-year-old from Boerne, Texas, traveled to Minnesota at the end of May to organize, participate in, and engage in a riot, and committed “an act of violence in furtherance of a riot,” according to a federal criminal complaint (pdf) released on Oct. 23, and as detailed in an attached affidavit.

FBI special agent Jason Bujold said in the affidavit that Hunter claimed to be a member of the Boogaloo Bois, which the complaint describes as a “loosely-connected group of individuals espousing violent anti-government sentiments” and that the group’s name “references a supposedly impending second civil war in the United States and is associated with violent uprisings against the government.”

The complaint details a series of messages allegedly exchanged between Hunter and other Boogaloo Bois members ahead of a planned trip to Minnesota in late May, when Minneapolis and St. Paul were the scene of widespread arson, rioting, and looting, partly in response to the death of Floyd in police custody.

“Lock and load boys. Boog flags are in the air, and the national network is going off,” said one of several May 27 messages allegedly posted by an admitted Boogaloo Bois member from North Carolina, with whom Hunter allegedly communicated as both men departed for Minnesota.

Other messages that were exchanged, and cited in the complaint, paint a picture of tactical and logistical communications leading up to and following an incident in which someone, allegedly Hunter, fired 13 rounds from an AK-47-style semiautomatic rifle into the Minneapolis Third Police Precinct building.

The gunman was captured on security cameras, the complaint says, with footage showing him walking up to the camera and high-fiving other individuals before shouting “Justice for Floyd!” The police building was later overrun by demonstrators and severely damaged by fire.

“A cooperating defendant has identified HUNTER as the individual who fired an AK-47 style rifle at the precinct building during the evening hours of May 27,” Bujold wrote in the affidavit. “This person informed investigators that at the time HUNTER fired the shots, there were other people believed to be looters still inside the building.”

Investigators found that Hunter sent messages several days later to an associate, writing, “My mom would call the fbi if she knew what I do and at the level I’m at w[ith] it.”

Hunter was arrested during a traffic stop on Oct. 21 in San Antonio, and made his initial court appearance the following day, according to the U.S. Attorney’s Office in the District of Minnesota.

“Several days after the traffic stop, federal agents became aware of HUNTER’s online affiliation with Boogaloo Bois member Steven Carrillo, who has been charged in the Northern District of California with the May 29, 2020, murder of a Federal Protective Service Officer in Oakland, California,” the attorney’s office said in a release.

The case falls under the scope of the Attorney General’s Task Force to Combat Violent Anti-Government Extremism (pdf), which was established earlier this year to help prosecute individuals and groups that commit violence in the name of an anti-government ideology.