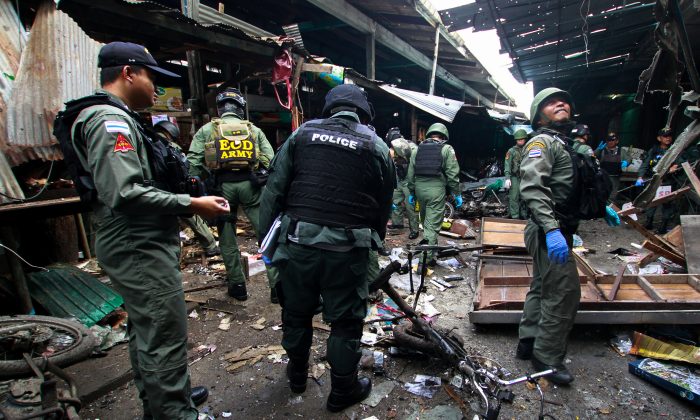 Military personnel and police officers inspect the site of a bomb attack at a market in the southern province of Yala, Thailand, Jan. 22, 2018. (Reuters/Surapan Boonthanom)
Asia & Pacific

BANGKOK—A motorcycle bomb exploded in a market in Thailand’s southern Yala province on Monday, killing three people and wounding 22, a spokesman for the Internal Security Operations Command (ISOC) said, the first such attack in the region in months.

The mostly Muslim provinces of Narathiwat, Pattani and Yala in Thailand’s far south are home to a long-running insurgency by ethnic Malay Muslims fighting for autonomy in which more than 6,000 people have been killed since 2004.

“The criminals put a bomb in a motorcycle and placed it next to a market cart. The force of the explosion caused three people to lose their lives,” said ISOC spokesman Pramote Prom-in. The ISOC is a government security force that operates in the region.

No group claimed immediate responsibility for the attack on Monday, which took place at a morning market.

Police said the motorcycle was placed near a stall selling pork, which is strictly forbidden for Muslims under Islamic Law.

It was not immediately clear whether the bomb was placed at the pork stall in a deliberate attempt to target Thai Buddhists.

The stall’s female owner and a male customer were among the three people killed, police said. The bomb blew off chunks of the market’s corrugated tin roof and wrecked nearby stalls.

At least 3 people killed and 9 injured in a suspected motorcycle bomb blast at a morning market in Tambon Sateng of Muang Yala district, Yala province this morning. #Thailand #DeepSouth pic.twitter.com/1xZB7tTwCJ

The southern provinces have seen hundreds of attacks since 2004, many of them deadly, but there had been fewer violent incidents of late.

Analysts who monitor the conflict say violence from the insurgency fell to a historic low in 2017 despite the fact that talks aimed at bringing peace gained little traction.

Thailand’s military government has tried to revive talks with rebel groups initiated by the previous civilian government, but they have gone almost nowhere.

Resistance to Buddhist rule from Bangkok has existed for decades in the predominantly Muslim southern provinces, waning briefly in the 1990s before resurfacing violently in 2004.