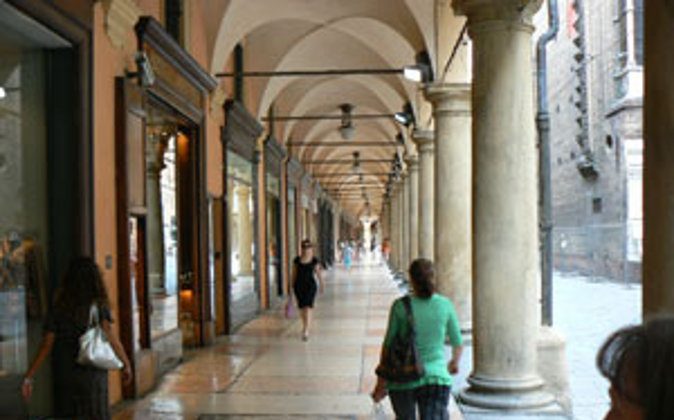 Strolling under the Porticos, more than 40 kilometres, in the city of Bologna. photos by Max Hartshorne. (Go Nomad)
Destinations

Ask Italians which city they most prefer and Bologna will invariably top the list, yet most foreign tourists have yet to discover this charming city located in the center of the Emilia Romagna region.

If you have ever used the Italian autostrada or railways, there is a good chance you’ve passed through Bologna en route to Venice, Florence, or Milan because of its strategic location at the junction between northern and southern Italy.

Its historic center has been beautifully preserved and although a modern city in many senses, Bologna has successfully maintained its medieval look.

History and Piazza Maggiore As early as 3000 years ago Bologna was a settled community located at the edge of a sea which no longer exists. The Romans subsequently conquered “Bononia” in 189 b.c. and a period of growth and prosperity began. The remains of Roman street layouts and aqueducts are visible from some spots in the city.

The sea eventually disappeared and the canals connecting medieval Bologna to Venice were covered over in the 1800s but are still visible from Via Piella and help today’s visitor understand why there is a statue of Neptune (by Giambologna) near Piazza Maggiore, the central and most important piazza located in the heart of the city. It is the historic and cultural soul of Bologna, surrounded by buildings representing the city’s economic, cultural and religious power.

The grand and imposing Basilica of San Petronio — Bologna’s patron saint — runs along one side.

Begun in 1390 and intended to rival St. Peter’s in Rome, it is large and imposing but retains a rustic look because the Bolognese coffers ran dry and the facade has remained unfinished. Today it is the fourth largest basilica in the world.

Palazzo Comunale, also in Piazza Maggiore, was built in the 13th century and houses a modern municipal library where visitors can check email and view Roman ruins found during renovations.

The 40 kilometres of beautiful porticos lining Bologna’s buildings originated in the middle ages as a way to provide extra lodging for the growing population. They create a wonderful sense of unity and have come to distinguish the city’s architecture. Most buildings are faced not of marble, as in other parts of Italy, but of clay, sandstone and red brick, giving the city a welcoming warmth.

You can walk for extended periods of time without being exposed to the elements, a nice touch when the weather isn’t sunny and warm!

A short distance from Piazza Maggiore you’ll find The Due Torri in Piazza Ravegnana — the two towers erected in the twelfth century by the noble Asinelli and the Garisenda families as a testament to their wealth and power. They are the most famous of the many medieval towers found in Bologna.

Copyright © 2014 by Go Nomad. This article was written by Sarah Robertson and originally published at www.gonomad.com