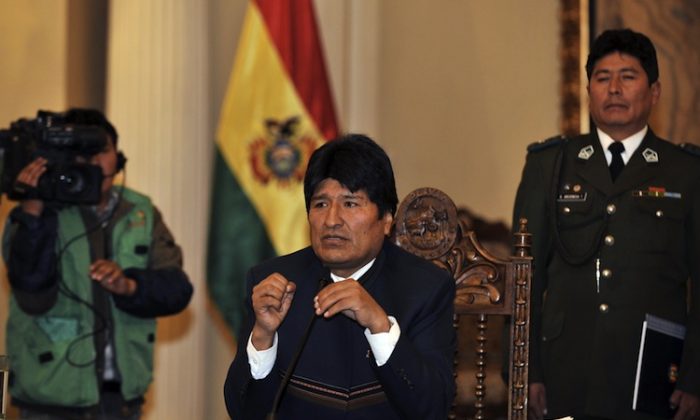 Bolivia took over and nationalized the assets of a Canada-based silver mining company in Bolivia, following violent protests over the firm’s development plans.

The South American Silver Corporation was accused of inciting violence between mostly indigenous natives around the Malku Khota silver-indium-gallium mining project that it was developing near the southwestern city of Potosi.

The company said in a statement Wednesday that it received no forewarning from the Bolivian government regarding its plans to nationalize the mine.

“We strongly object to the government’s stated course of actions and we will pursue all legal, constitutional, and diplomatic options,” said Greg Johnson, president of the mining firm.

But leftist Bolivian President Evo Morales contended that “brothers, brothers-in-law, cousins, and neighbors” were at odds with one another because of the company’s actions, according to a statement Tuesday.

“How can we be at odds with each other over an international company that comes to loot our natural resources?” Morales said, according to Reuters.

Rivals in local communities took seven hostages over the development plans, including the company’s employees and local police.

Workers who were held hostage were released after the government said it would consider a study in nationalizing the project, Reuters said.

South American Silver said that 43 out of 46 indigenous communities support the Malku Khota project. It has invested over $16 million to explore the site since 2007, it said in a press release, and has developed a proprietary technology at the site, which it says is key to developing the mine’s potential.

Morales’s move comes just weeks after he announced nationalizing the Colquiri mine owned by Glencore International.