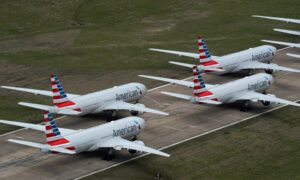 A Boeing logo is pictured during the European Business Aviation Convention & Exhibition at Geneva Airport, Switzerland, on May 28, 2018. (Denis Balibouse/Reuters)
US News

Boeing Tells Workers They Must Get COVID-19 Vaccine by December

Boeing has told employees they must be vaccinated against COVID-19, a spokesperson confirmed.

Employees must be vaccinated by Dec. 8 in line with the deadline set by President Joe Biden requiring federal employees as well as companies that are contractors and subcontractors of the government to receive the shots.

“To ensure compliance with President Biden’s executive order for federal contractors, Boeing is requiring its U.S.-based employees to either show proof of vaccination or have an approved reasonable accommodation, based on a disability or sincerely held religious belief, by Dec. 8,” a Boeing spokesperson said in a statement to The Epoch Times.

“Boeing will continue to carefully monitor guidance from public health agencies, and requirements from federal, state, and local governments to inform our COVID-19 policies. We continue to prioritize the health and safety of all of our employees,” they added.

Multiple airlines have mandated vaccines for employees, with United Airlines being the first U.S. carrier do so, announcing the mandate in August. United Airlines confirmed on Sept. 29 that it was going to terminate 593 of its employees who have chosen not to comply with the company’s vaccine mandate.

Workers at multiple airlines across the United States last week protested against COVID-19 vaccination mandates after numerous carriers announced employees must get vaccinated or risk losing their jobs.

Hundreds of American Airlines workers—including pilots and flight attendants in uniforms—took to the streets outside the company’s Fort Worth, Texas headquarters on Thursday to protest against the new measures, The Dallas Morning News reported.

Many of them brandished signs reading “Mandates won’t fly” and “Don’t fire my Dad” in response to the new rules, while some protesters said they were skeptical of the effectiveness of the vaccine and concerned about side effects.

The U.S. Centers for Disease Control and Prevention (CDC) hasn’t reported any long-term side effects from the approved COVID-19 vaccines, noting that they have undergone and will continue to undergo the most intensive safety monitoring in U.S. history.

American Airlines told workers in an email on Oct. 6 that they have to be fully vaccinated by Nov. 24 or face termination.

Southwest Airlines (SWA) also announced it will require all of its 56,000 U.S. employees to be vaccinated against COVID-19.

The Southwest Airlines Pilots Association (SWAPA), a union, announced on Oct. 5 that it would be filing a temporary restraining order against SWA to stop the company from carrying forward its mandate. The order forms part of a lawsuit that SWAPA filed on Aug. 30 challenging forced time off and other changes to working conditions imposed by the airline during the COVID-19 pandemic.

“We want to be perfectly clear: SWAPA is not anti-vaccination, but we do believe that, under all circumstances, it is our role to represent the health and safety of our pilots and bring their concerns to the company,” SWAPA said in a statement.

Multiple other big businesses across America have also mandated vaccines, including Walmart and Ford, and tech giants Microsoft, Google, and Facebook.

Delta Air Lines remains a major U.S. carrier that has chosen not to mandate COVID-19 vaccines for all its employees, although it does require all new U.S. employees to be vaccinated, and that all unvaccinated Delta staff enrolled in its health care plan pay a $200 monthly surcharge.

The latest employee mandate from Boeing comes as more than a dozen states such as Texas are actively opposing Biden’s mandate orders.

On Monday, Texas Gov. Greg Abbott issued an executive order banning vaccine mandates by any entity in the state, including private employers.

Abbott has called Biden’s executive order “an assault on private businesses” and previously said that the state is working to halt “this power grab.”