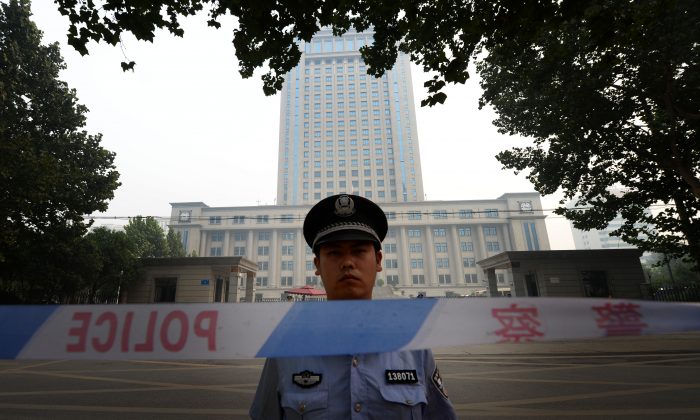 The trial of Bo Xilai, a former Communist Party star who is now disgraced, concluded its fifth and final day on Aug. 26, with Bo making an unusual admonition to the prosecuting authorities.

They were words that Bo Xilai would never have said as a Communist Party Secretary, but sitting in the dock as a prisoner, he was in a rather different position.

It was also a rich remark coming from Bo Xilai, according to observers familiar with his political career. His path through the ranks of the Chinese Communist Party has been marked by extraordinary abuses of the criminal justice and security systems, critics say.

In Bo’s most recent posting before he was taken down amidst a brutal political brawl, he was the boss of the large southwestern city of Chongqing, where he is accused of shaking down thousands of entrepreneurs and political rivals using the legal system. He and his deputy Wang Lijun, who testified against him recently, would accuse the businessmen of being part of the mafia, torture them for confessions, and then jail them and seize their assets.

Bo also sent one Chinese Internet user in Chonqging to one year of re-education through forced labor after he made a scatological joke about Bo via social media.

And in his previous post as Minister of Commerce, Bo Xilai was sued for crimes against humanity in over ten countries for assisting Jiang Zemin, the former leader of the Communist Party, in the persecution of Falun Gong, a spiritual practice. The campaign against that group in China has resulted in, it is suspected, tens of thousands of deaths, many of them due to execution in the course of organ harvesting.

Before he was Minister of Commerce, Bo was the Party Secretary of Liaoning Province, in the northeast, and before that he was the mayor of Dalian, a city in that province. In both those roles he is accused of helping to ramp up the persecution of Falun Gong, overseeing the rapid expansion of forced labor camps. A number of the camps in that region also became infamous for their brutality. The Masanjia Women’s Labor Camp, for example, became a pioneer in the use of sexual torture against female practitioners of Falun Gong under Bo’s watch.

The last four days saw Bo face the wrath of the Chinese criminal justice system himself, though in this case the iron fist of the state was swathed in many layers of velvet, according to lawyers in China who have watched the case closely and are familiar with Bo’s political trajectory.

“The trial was like a play,” said Liu Zhengqing, a civil rights lawyer based in Guangzhou, in a telephone interview with Epoch Times. “Bo is a tyrant. If he became China’s leader, he would be even worse than Mao Zedong.”

Liu pointed out that at the trial Bo was only charged with three transgressions, whittled down from the six that were originally brought against him by the authorities after his arrest last year.

Aside from that, “the trial didn’t even touch the issue of organ harvesting, the coup attempt, or the antimafia and ‘singing red songs’ campaigns,” which Bo launched in Chongqing, Liu said.

Bo was reported to have attempted to stage a coup, along with former security czar Zhou Yongkang, to disrupt the accession to power of the current Party leader Xi Jinping, and install himself as head of the Communist Party. It was this, rather than mere corruption, that is thought have brought the fury of the Party upon his head, according to Liu.

With so much swirling in the background that neither the Communist Party nor Bo Xilai would wish dragged into the open, the trial became a negotiated play: Bo was allowed to defend himself, but he kept to quibbling about the details of the (relatively) minor crimes he had been charged with, rather than denounce the legitimacy of the process itself.

At least that is what can be known from the court transcripts, which are strictly reviewed before being released to the public on the microblog account of the Jinan Intermediate People’s Court, where the trial is being held. No video or audio of Bo has been released since his hearing, and sources told The New York Times that some of Bo’s protestations were scrubbed from the transcripts before they were posted online.

Li Zhuang, a Chinese criminal defense attorney who was jailed by Bo amid the height of the antimafia campaign in Chongqing, remarked in a telephone interview that Bo is “very good at acting.”

Liang Xiaojun, a Chinese civil rights attorney, remarked that the trial did not seem to proceed altogether smoothly for the authorities. “They seemed to think he would confess his crimes, but instead he denied all accusations. The trial revealed a lot of family secrets from the family of a high-level official, such as Wang Lijun having a crush on Gu Kailai, Bo slapping Wang Lijun, Xu Ming giving Gu Kailai and Bo Guagua a lot of money, Gu having mental problems, and so on.” He was referring to two others in the cast of characters that emerged during the trial, the son of Bo Xilai, Bo Guagua, and Xu Ming, a business associate of the family who lubricated their lifestyles with regular injections of cash and gifts.

The authorities also took great care to contain the damage as they punished Bo: the amount of bribery and embezzlement that he was accused of was only in the millions — not hundreds of millions, or even billions — of dollars. The sums were not too little so as to be petty, but not too great as to give the Party a bad name.

According to the authorities, the verdict against Bo will be handed down “at a date to be decided.”