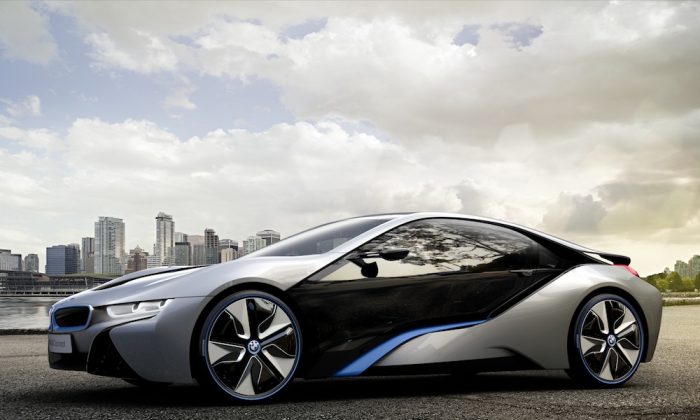 He’s talking about the i3 and i8, purpose built electric vehicles.

When BMW pulled out of Formula One in 2009, they shifted their focus (and research dollars) to green technology.

We’ve seen the rise in popularity of hybrid cars that put a traditional gasoline engine, electric motor, and heavy battery in a common monocoque body construct. Excess body weight was a pretty big problem. The i series cars are different.

“The architecture, the entire thought process that went into these cars was with the intention of it being an electric car,” explains Harb.

“All the materials are futuristic and progressive.”

Both i Series cars weigh in at a trim 1,250 kg. To reduce weight BMW has forgone the monocoque body, instead constructing these cars in two parts.

The “passenger cell” is carbon fibre reinforced plastic. That’s right, your very own taste of Formula One.

The carbon fibre cell is attached to the lower drive module that contains a flat lithium-ion battery, 100 percent aluminum chassis, and electric drive train. This leaves lots of space inside the car. Everything heavy is low to the ground—this means handling should be excellent.

Aside from being kind to the environment, electric cars can be incredibly responsive at city driving speeds, because torque is available immediately.

Still, there is no “Sport” setting planned for the i3 so you may not want to hit the track with it. That’s not what it’s about.

The i8 however, has two engines: a 3-cylinder combustion engine over the front wheels, and an electric over the rear. You guessed it, that’s 50:50 weight distribution.

It is expected to go from 0-100 km/hr in under five seconds. Fuel consumption is estimated around 3 L/100km. And it is just so, so good-looking.

Getting rid of the combustion engine and traditional transmission left lots of space. The i3 has opposing “coach” doors, a boot capacity of around 200 litres and an additional functional compartment in the front.

The brake-energy regeneration in these cars will mean you can slow the car by lifting the accelerator pedal. There will be a brake pedal, but you will use it far less, especially at lower speeds.

When can I drive one?

“There will be i3s on the road to drive here in North America at the end of the year,” says Harb, and as for the i8, well, probably early 2014.

You may wonder, are there enough early adapters to make a car like this profitable?

According to Town + Country BMW general manager Cynthia Cochrane, without a test drive, definite answers about the mechanicals, or even a price, people are already putting down cash deposits “sight unseen, price unknown.” Her dealership in Markham, Ontario has three i8s and seven i3s on order already.