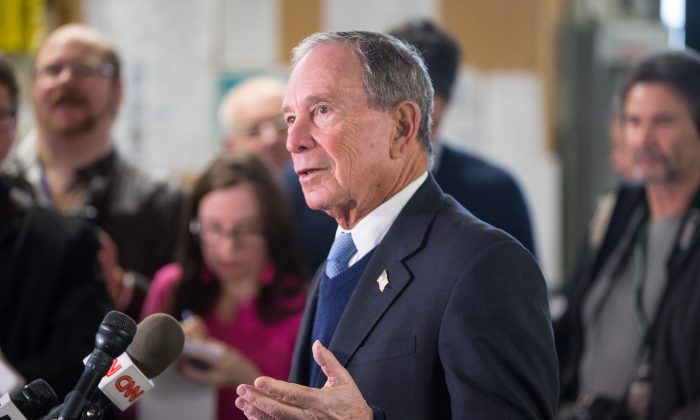 Bloomberg Only Democrat With Chance to Beat Trump, but Can He Win Nomination?

It’s not hard to see why Michael Bloomberg is considering running for president, going so far as to have his name placed on the Alabama primary ballot. If you look at his competition among announced Democratic candidates, he is the only one with much of a chance of beating Donald Trump next year.

Bloomberg originally stayed out because of the presence of Joe Biden in the so-called “moderate channel,” but, despite some polls, the former vice president looks to be imploding for reasons ranging from his inept, possibly age-related, stumbles to the scandal around his son Hunter.

The latter seems destined to grow worse as more emails and texts surface that tie the team of Biden & Son to corruption in Ukraine and, even more troublingly, China. Joe Biden won’t look like the man to negotiate with or even deal with Xi Jinping, by far America’s most powerful adversary.

Ominously too, reports from the Justice Department inspector general and U.S. Attorney John Durham on the provenance of the Russia investigation have yet to appear, along with possible indictments. The degree to which Biden is wrapped up in this is unclear, but indications are it could be significant. If that’s true, his political career and a lot else may be over.

Bloomberg is undoubtedly aware of this. If he does jump in, he must know his real competition for the nomination will be Elizabeth Warren, already seen as the front-runner.  Part of the former mayor’s impetus to run must be fear of the results of a Warren nomination and (unlikely as it is) presidency. This isn’t just because Bloomberg is a man of Wall Street but because Warren’s ideas are absolutely bonkers, a disaster for the economy approaching Venezuelan proportions.

At a recent “Latinx town hall,” she assured her audience that her (as of now) $52 trillion Medicare for All plan would also include “undocumented immigrants” (né illegal aliens). Not surprisingly, no one asked her the obvious follow-up–just how many such people are there? Good thing too, because no one knows. We used to be told 11 million illegals reside in the USA, but a recent Yale study bumped it to 22 million, although that was admittedly only an estimate.  The way things are going, Warren might as well offer free health care to all of Central America into the bargain. It might be cheaper in the end.

Still, especially if Warren is able to best Bernie Sanders in early caucuses and primaries, she may be on a glide path to the nomination.  It’s difficult to see how Bloomberg, should he get in, can stop her, even with all his cash. He’s too late to compete in any of the primaries until Super Tuesday.

Nevertheless, as I indicated, he is the only one of those running who would stand a chance against Trump. Indeed, Warren has already gone so far to the left, prodded to some extent by Sanders but also by her own thoughtless proclamations, she might end up losing 48 states, California and Massachusetts hanging on only because deep down their voters knew she would lose anyway. Their 401(k)s were safe.

But for the sake of argument, let’s imagine Bloomberg does get through the nomination gauntlet.  Could he win against Trump?

In the battle of the billionaires, with a staggering estimated net worth of $52 billion, even though it’s still not nearly enough to pay for Medicare for All, Bloomberg would have a decided cash advantage. If he so chose, he could probably buy every advertising slot on every television network for the entire campaign. Still, with his incumbency, immense loyal following, and substantial cash hoard of his own, Trump can easily counter what Bloomberg has to offer in the publicity department (unless Bloomberg actually buys the networks).

Whatever happens, we could look forward to four months of such pervasive, nonstop political advertising on television there will barely be room for anything else. It will be unprecedented. Our heads will spin.

On the issues, it would be complicated. Both are capitalists and obviously pro-business, so Bloomberg will have to tilt to the left more than he might want to (or actually believe) in order to differentiate himself from Trump. Bloomberg is likely to pick climate change as a big issue for him because it’s relatively safe. He might pretend to against the border wall, but it would probably be a pose.

Indeed, that would be the big problem for Bloomberg. He’s really not all that different from Trump, except in style. And where he is—gun control, etc.—the working class in the industrial Midwest would not be impressed.

Donald has already dubbed Bloomberg “Little Michael.”  Tacky perhaps, but, as we all recall, it worked against “Little Mario.” I think, in the end, Trump would march through Michael Bloomberg. And any of the other candidates.