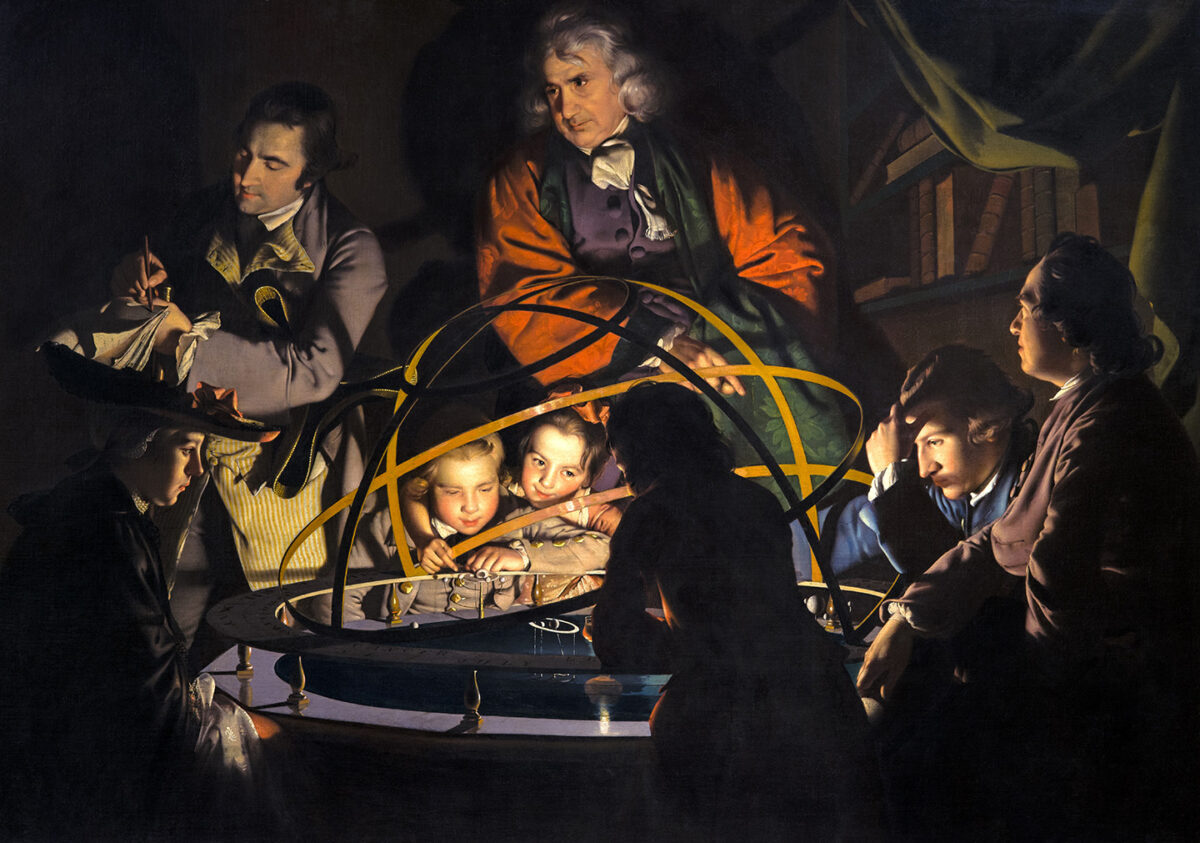 “A Philosopher Giving that Lecture on the Orrery, in Which a Lamp Is Put in the Place of the Sun,” circa 1766, by Joseph Wright of Derby. Oil on canvas. Derby Museum and Art Gallery, Derby, England. (Public Domain)
Arts & Tradition

Block the Sun, Move the Planets, Save the World!

In the last few years we have had at least three amazing, mind-boggling concepts from the super-rich and super-powerful elites who, though unelected, seem to have extraordinary influence over governments, academic institutions, and the working lives of ordinary people.

In no particular order, these three ideas are:

One, that we can go to Mars and live there. (Anyone? Great views, apparently.)

Two, that it’s fine for NASA to spend $324.5 million to send a rocket into space in order to save the world. This plan to save the world involved crashing into an asteroid to alter its orbit. I am reminded of Oedipus who, learning from a prophecy that he would kill his father and marry his mother, fled Corinth and, by fleeing, thereby managed to unintentionally fulfill the prophecy. Perhaps we would now call this the Law of Unintended Consequences.

Three, and perhaps most worrying of all, there is a plan for sun-dimming technology. Sun-dimming technology? What? We are going to block sunshine? Aside from all the other factors involved in climate change, one striking thing that I learned from Jeremy Nieboer’s book “Climate: All Is Well, All Will Be Well” (2021) was this astonishing piece of research: “On a global scale an analysis of 75,225,200 deaths in 13 countries over the period 1985–2012 with wide ranges of climate conditions revealed that cold weather kills 20 times more than hot weather.” I guess that blocking the sun is going to make us colder, then. Hm.

Those who have read my articles will know that I am not a scientist and am not making any pretense of being one; my interest is in mythology and what it tells us. Usually, what it tells us are profound psychological truths—truths more revealing than the many factoids of science, which seem to change as political opinion sways back and forth. The recent epidemic and the question of vaccination is just such a case in point.

So which myth is most relevant here to explain these incredibly reckless, dangerous, and irresponsible actions? It’s not one myth, but really one word—one word that the Greeks had for all this kind of activity—hubris.

What exactly, then, is hubris? My favorite example of it from the ancient myths is one I have referred to before. (See my previous article, part of the “Myths for Our Times” series, “Capaneus and the Age of Hubris.”) In storming the city of Thebes, Capaneus cried out, “Not even Zeus can stop me now,” and for this blasphemy, Zeus struck him down with a lightning bolt, for after hubris (as the Greeks knew) comes the other god, Nemesis, or retribution.

But let us examine this concept a little more. It begins with the Enlightenment. Note that the word “light” in enlightenment recalls that Prometheus’s hubris entailed his stealing fire for man: fire producing light. The thinkers of the Enlightenment, according to the philosopher John Gray, “saw themselves as reviving paganism, but they lacked the pagan sense of the dangers of hubris. With few exceptions, these savants were actually neo-Christians, missionaries of a new gospel more fantastical than anything in the creed they imagined they had abandoned.”

This new gospel, of course, which replaced Christianity and all organized religions, was the gospel of “reason.” Through reasoning, human beings could create a utopia on earth and be free of God and the gods once and for all.

The Jungian psychologist James Hollis correctly observed, however: “Our hubristic belief that we are in control of ourselves and nature only makes us more unconscious of what is at work within us.”

This blindness to the forces unconsciously at work within us—for all the so-called reason that was being practiced—led to World War I and II, and is still with us today. Communism is just one manifestation of it as it manifests in scientific materialism.

It may seem a stretch to say that the world wars were caused by worshiping reason. Worshiping reason, in effect, is what the Enlightenment initiated and what has been going on ever since. Witness the status and seemingly unquestioning authority of science and scientific experts. It is not just a stretch but also a profound irony of the Oedipus type. The fanatics of this creed specifically sought to destroy Christianity and religions, which they perceived as superstitions, and then replace them with reason.

They held religions responsible for wars, crusades, inquisitions, and all the evils of the world. If only one could be rid of religions and replace them with reason, then the world would be a better place by far: utopia around the corner, in fact.

The Darker Side of Hubris

But hubris, when we break it down even further, isn’t just about defying Zeus and the gods, or Christianity or other religions; there is a deeper level to it. In his book “A Brief Guide to Classical Civilization,” Stephen Kershaw writes: “Hubris is more than an attitude—it manifests itself in violent or arrogant actions. It was the Greek word for GBH [Grievous Bodily Harm].”

Elaborating on this further, Peter Jones, in his book “Eureka! Everything You Wanted to Know About the Ancient Greeks but Were Afraid to Ask,” states that hubris

“… originally meant doing physical violence to someone; by extension, it came to mean humiliating someone in order to get the upper hand over them, to show them who was boss, physically or socially. The aim was to degrade or demean the other person, as Aristotle says, for the sheer pleasure of demonstrating your superiority. That was something no proud Greek would take from anyone; and no god would take from any mere mortal.”

In other words, hubristic individuals are not just displaying an attitude that is antagonistic to religions, to the gods, or to God Almighty himself, but that, in its very spirit, is violent and aggressive and seeking domination. It brings to mind that prophetic book by J.R.R. Tolkien, “The Lord of the Rings,” wherein we have the Dark Lord, Sauron, seeking to dominate all living things in Middle Earth.

Colonizing Mars, knocking asteroids off course, and blocking the rays of the sun are surely acts of massive aggression and hubris. These acts all say: We can control the universe! Watch us as we do it!

On top of this unsavory attitude, the individuals proposing all this nonsense are also quintessentially virtue signaling. They are not only doing good, but are also saving the world. They are to be the saviors of mankind. We do not need to praise and celebrate gods or God, but them!

Charlie Munger, Warren Buffett’s longtime friend and business partner, once sadly observed that “In every era … a great nation will, in due time, be ruined. … Our turn is bound to come. But I don’t like thinking about it too much.” Who does like thinking about it? America is a wonderful country, probably the greatest in the world, but with these kinds of hubristic people taking an increasing role in its affairs, the time lag before it comes undone is massively shortened, for after hubris comes Nemesis, and Nemesis is the god of retribution.

You don’t start bossing the sun and planets around, do you, and think that they are not going to come back with a vengeance.