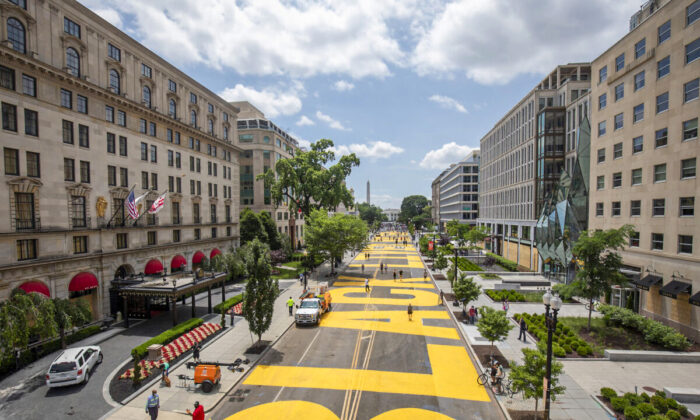 People walk down 16th street after volunteers painted "Black Lives Matter" on the street near the White House in Washington on June 5, 2020. (Tasos Katopodis/Getty Images)
US News

The national arm of Black Lives Matter (BLM) on Feb. 2 shut down all of its online fundraising streams, shortly after California’s Department of Justice threatened to hold the organization to account over its “lack of financial transparency,” which includes at least $60 million in undisclosed donations.

California and Washington states had recently prohibited BLM from collecting donations due to transparency issues, but it did not comply with those orders, the Washington Examiner reported.

The news outlet found last week that the charity appeared to have no known leader in charge of its $60 million bankroll since BLM co-founder Patrisse Cullors resigned in May 2021. Cullors had been at the helm of the Black Lives Matter Global Network Foundation (BLMGNF), the legal entity that represents the national BLM movement, for nearly six years.

“We take these matters seriously and have taken immediate action,” a spokesperson for BLMGNF told the Washington Examiner. “We have immediately engaged compliance counsel to address any issues related to state fundraising compliance. In the interim, we have shut down online fundraising as we work quickly to ensure we are meeting all compliance requirements.”

California’s Department of Justice issued a formal delinquency notice to the group on Monday.

“An organization that is delinquent, suspended or revoked is not in good standing and is prohibited from engaging in conduct for which registration is required, including soliciting or disbursing charitable funds,” the letter added.

The state gave BLM 60 days to file tax and charity documents for 2020.

“Accordingly, directors, trustees, officers and return preparers responsible for failure to timely file the above-described report(s) are personally liable for payment of all penalties, interest and other costs incurred to restore exempt status,” the letter said.

The Epoch Times has contacted the California Department of Justice and BLM for comment.

Shortly before the organization cut off its online fundraising streams, Indiana Attorney General Todd Rokita described Black Lives Matter as a falling “house of cards” and compared it to an “illegal enterprise.”

“It appears that the house of cards may be falling, and this happens eventually with nearly every scam, scheme, or illegal enterprise,” Rokita, a Republican, told the Washington Examiner.

It wasn’t immediately clear whether BLM is being probed by Rokita’s office, however Rokita told the news outlet that BLM’s undisclosed finances “certainly cause us to be concerned.”