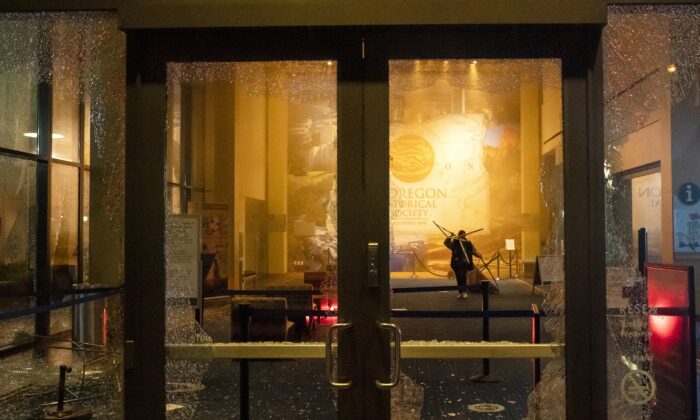 A woman pulls a quilt from the display case inside the Oregon Historical Society during a riot in Portland, Ore., Oct. 11, 2020. (Nathan Howard/Getty Images)
Judiciary

An Indiana man has been sentenced to 10 years in federal prison for playing a significant part in fueling violence during the Black Lives Matter (BLM) protests and rioting in Portland, Oregon, in 2020.

Malik Fard Muhammad, 25, was sentenced on June 21 for “repeatedly and intentionally jeopardizing the lives of police officers, destroying public property, and encouraging others to commit violence during protests,” according to a Department of Justice (DOJ) statement.

In addition to the prison term, Muhammad was sentenced to three years of supervised release. Although the DOJ release didn’t mention the BLM protests in its release, Muhammad was arrested in 2020 following evidence collected at a BLM protest-turned-riot.

During the BLM demonstrations that ended in violence on Sept. 21, 2020, Muhammad threw a beer growler made into a Molotov cocktail onto a police officer sitting inside his vehicle. The officer jumped out when he saw the firebomb hurtling toward him, which didn’t detonate.

“Anyone who thinks they can get away with trying to murder police officers and destroy this city should think again,” Portland Police Chief Chuck Lovell said in a statement last year announcing Muhammad’s arrest.

“Holding accountable those individuals whose sole focus is violence and destruction, like Mr. Muhammad, is central to our ongoing effort to support the rights of all Oregonians,” said Scott Erik Asphaug, U.S. attorney for the District of Oregon.

The district attorney’s office said that Muhammad intentionally and repeatedly jeopardized the lives of police officers, engaged in activities that destroyed public property, such as smashing the Oregon Historical Society’s windows, while calling on others to commit violence.

“The right to protest peacefully is absolute,” said Special Agent in Charge Jonathan McPherson of the Seattle Field Division of the Bureau of Alcohol, Tobacco, Firearms, and Explosives . “But it is clear Mr. Muhammad didn’t come to exercise his rights. He came from out-of-state to bring violence to our community.”

A Trip of Violence

Based on court documents, Muhammad traveled to Portland from Indianapolis with his girlfriend in the late summer of 2020 to be part of the BLM demonstrations.

Through evidence and DNA collected from riot grounds and cell phone surveillance, along with closed circuit television footage where Muhammad was seen purchasing bats and several “growler” bottles, law enforcement connected him to the crimes.

On Sept. 23, 2020, “protesters set fire to and broke windows at the Multnomah County Justice Center,” the DOJ release said. “When officers advanced toward the crowd, an individual threw a Molotov cocktail in a large yellow growler that landed in front of the officers, shattered, and exploded into a large fireball. While some officers were able to move out of the way, one officer’s leg caught fire. Several videos obtained by law enforcement show Muhammad throwing the explosive device.”

Muhammad was arrested on Oct. 11, 2020, after a short chase following the destruction of building windows with a group of 250 people in downtown Portland. He had on him a loaded handgun magazine during the arrest.

Muhammad later pleaded guilty in Multnomah County Circuit Court to “seriously burning a demonstrator by throwing a Molotov cocktail” and handing out baseball bats to the crowd, the DOJ release said.

Besides BLM, Muhammad was also allegedly involved with the extremist organization Antifa.

“Investigators obtained evidence that he traveled to Louisville, Kentucky, in August 2020 to meet with anti-government and anti-authority violent extremist groups to conduct firearms and tactical training,” the DOJ release said.

“On May 28, 2022, Muhammad pleaded guilty to two counts of possessing unregistered destructive devices. As part of his sentencing, Muhammad forfeited or abandoned his interest in a 12-gauge shotgun, an AR-15 semi-automatic rifle, a second rifle, a pistol, assorted ammunition, and all seized Molotov cocktail components and ingredients.”

Muhammad will serve his sentence in the Oregon state prison.