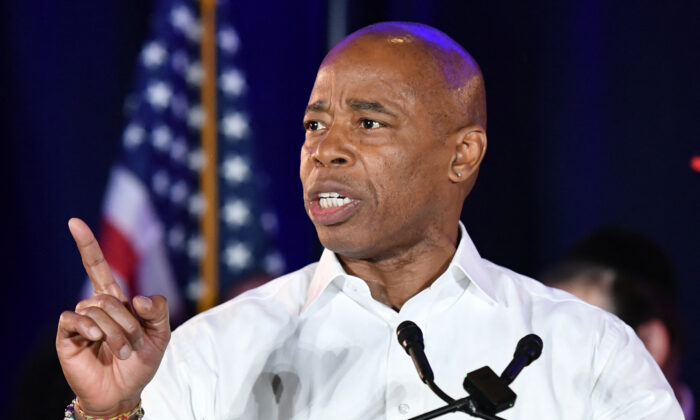 A Black Lives Matter leader has claimed there will be “bloodshed” if newly elected New York City Mayor Eric Adams stands by his plan to toughen police reforms to counter the city’s surge in violent crime.

New York City BLM co-founder Hawk Newsome discussed the issue with Adams during an event on Wednesday at Brooklyn Borough Hall that was livestreamed on Instagram.

Adams, a former NYPD captain, said during the event that he will reinstate the undercover anti-crime unit ended during police protests last year.

The new mayor won in November after a victory during a crowded June primary, running as a moderate who would be tough on crime, winning against several prominent progressives.

“There’s one thing that we do agree on, that we need to change conditions that people are living in, historical conditions. And the conditions have not changed,” Adams said during the meeting.

Newsome made his strongest comments to reporters outside of the building.

“If they think they are going back to the old ways of policing then we’re going to take to the streets again,” Newsome said to media after the meeting.

Adams ran in part on the campaign promise to return a revised version of the anti-crime unit that was responsible for a citywide crackdown on violent crime, illegal drugs, and firearm arrests.

The original unit was ended during the summer of 2020 when it was reported that an alleged disproportionate number of arrests involved black individuals.

Adams has already begun plans to address other issues in his new administration as well, including the city’s COVID-19 vaccine mandates.

The mayor-elect shared on Nov. 5 what he meant when he said he wanted to “revisit” the city’s COVID-19 vaccine mandate for workers.

“We need to revisit how we’re going to address the vaccine mandates,” Adams said during a cable TV appearance on Wednesday.

Adams said he would encourage Mayor Bill de Blasio to talk with unions as the parties attempted to reach an agreement on how applications for exemptions and other details were handled.

The comments left some expressing optimism that Adams would ease the mandate, which is among the harshest in the nation.