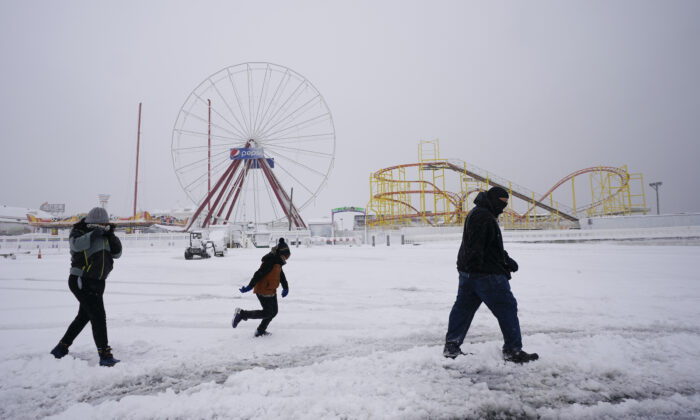 David Bowling (R) walks with his children as they check out the snow near amusement rides along the Ocean City Boardwalk following a snowstorm in Ocean City, Md., on Jan. 29, 2022. (Julio Cortez/AP Photo)
US News

After the Blizzard, the Big Chill as East Coast Digs Out

BOSTON—Gusty winds and falling temperatures plunged the East Coast into a deep freeze Sunday as people started digging out after a powerful nor’easter dumped mounds of snow, flooded coastlines and knocked out power to tens of thousands.

Dangerous wind chills fell below zero in many locations across the region after the storm dumped snow from Virginia to Maine. Philadelphia and New York had plenty of snow, but Massachusetts bore the brunt of the storm, with the neighboring towns of Sharon and Stoughton getting more than 30 inches of snow before the storm moved out.

More than 100,000 lost power at the height of the storm, mostly in Massachusetts. The outages in Massachusetts had dropped to fewer than 50,000 by mid-day Sunday, mostly on hard hit Cape Cod. No other states reported widespread outages.

Utility Eversource said Sunday it had 1,700 crews working to restore electricity in Massachusetts, and expected everyone to have power back by late Monday.

In and around New York City, snow totals ranged from a few inches in some areas north and west of the city to more than 2 feet in Islip on Long Island, according to the National Weather Service. Warren, Rhode Island got more than 2 feet, and Norwich, Connecticut finished with 22 inches. Some areas of Maine and New Hampshire also received more than a foot.

Winds gusted as high as 83 mph on Cape Cod. It scoured the ground bare in some spots and piled the snow into huge drifts in others. Coastal towns flooded, with wind and waves battering North Weymouth, south of Boston, flooding streets with a slurry of frigid water, according to video posted on social media. Other videos showed a street underwater on Nantucket and waves crashing against the windows of a building in Plymouth.

A Rhode Island couple got married as planned Saturday during the blizzard, according to broadcast reports. Sally Faulkner and Adam Irujo had been planning a wedding for 14 months, so they went through with the nuptials on the steps of the Providence Public Library in front of a few family and friends.

The city tied its record for biggest single-day snowfall on Saturday, with 23.6 inches, the National Weather Service said.

Like most major winter storms in New England, it drew comparisons to the infamous Blizzard of 1978, which paralyzed the region for days.

“I was around for the Blizzard of ’78, and this one was worse. The wind was tremendous,” Joe Brescia, 72, said Sunday, tears streaming down his face from the bitter cold as he shoveled his sidewalk in Warwick, Rhode Island.

Bao Ha, 26, didn’t think it was that bad until he went outside to shovel Sunday morning, under sunny blue skies, but frigid temperatures that felt well below zero with the wind chill.

“It’s funny, it didn’t look so bad when I looked out the window this morning,” he said as he shoveled the sidewalk in front of his home in Waltham outside Boston, which according to the National Weather Service, got 16 inches of snow. “But it’s light, so it’s easy to shovel.”

The storm had two saving graces: Dry snow less capable of snapping trees and tearing down power lines, and its timing on a weekend, when schools were closed and few people were commuting.

Parts of 10 states were under blizzard warnings at some point: Maine, New Hampshire, Massachusetts, Rhode Island, Connecticut, New York, and New Jersey, along with much of the Delmarva Peninsula in Delaware, Maryland, and Virginia.

The National Weather Service considers a storm a blizzard if it has snowfall or blowing snow, as well as winds of at least 35 mph that reduce visibility to a quarter-mile or less for at least three hours. In many areas, Saturday’s storm met those criteria.