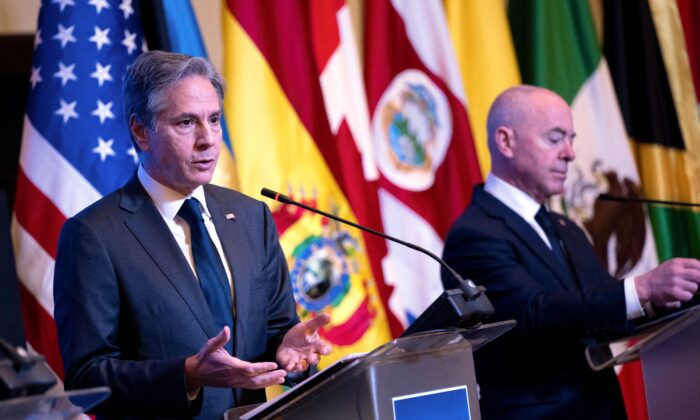 U.S. Secretary of State Antony Blinken and U.S. Secretary of Homeland Security Alejandro Mayorkas attend a press conference on the Ministerial Conference on Migration and Protection in Panama City on April 20, 2022. (Brendan Smialowski/POOL/AFP via Getty Images)
By Frank Fang

Secretary of State Antony Blinken and Homeland Security Secretary Alejandro Mayorkas have been told that they may face congressional probes if they can’t secure the southern border and reduce the flow of illegal migrants from Venezuela, according to a Republican lawmaker.

In a letter to Mayorkas and Blinken, 14 House Republicans led by Rep. Yvette Herrell (R-N.M.) raise concerns about an increase of Venezuelans coming to the United States via the southern border, particularly to El Paso, Texas.

Herrell posted the warning on Sept. 27.

“If they won’t even try to secure our country & end human trafficking, they can explain themselves to Congressional investigations soon,” Herrell wrote.

While Herrell didn’t elaborate, House Republicans have said that they plan to open multiple investigations over the Biden administration’s policy failures, including border control, if they secure a majority in the chamber in the November elections.

Some Republicans have said they would use their majority to impeach Mayorkas over the border crisis, including Rep. Clay Higgins (R-La.), who is the top Republican on the House Homeland Security Committee’s border security subcommittee. Also calling for Mayorkas’s impeachment is Irene Armendariz-Jackson, who is the GOP candidate for Texas’s 16th Congressional District, which includes most of El Paso.

According to data from U.S. Customs and Border Protection, there were nearly 204,000 migrant encounters at the U.S.–Mexico border in August. Among those, 25,349 were from Venezuela, a significant jump from 17,652 encountered in July, and drastically higher than the 6,304 encountered last August.

Many of these Venezuelan migrants have chosen to travel to El Paso, according to Herrell’s letter, which was obtained by Fox News.

“El Paso has now become ground zero of the border security crisis facing our country, as Venezuelan migrants have begun to view El Paso as the most hospitable location to illegally cross the U.S. border,” the letter says.

The letter was signed by 13 other House Republicans, including Higgins and four lawmakers from Texas—Reps. Mayra Flores, Lance Gooden, Louie Gohmert, and Brian Babin.

U.S. Border Patrol has said that there were 1,500 daily migrant encounters in El Paso in September, Border Report said on Sept. 19; About 20,000 Venezuelan migrants have crossed into El Paso since July.

The GOP lawmakers noted how U.S. border officials have had difficulty removing migrants in El Paso under the pandemic rule known as Title 42. On one recent day, there were 1,967 apprehensions in El Paso Sector, but only 335 were expelled under Title 42, according to the letter.

“The rest will be released into the public and await a court date, which can take more than two years,” the letter says. “The United States does not have a repatriation agreement with Venezuela, therefore it is nearly impossible for the United States to deport migrants to Venezuela or use Title 42 to return migrants.”

It’s more difficult for the United States to send Venezuelans, Nicaraguans, and Cubans back to their countries given that U.S. relations with those nations are strained.

El Paso Mayor Oscar Leeser, a Democrat, has been busing migrants to cities including New York City and Chicago. Leeser recently told Border Report that he didn’t want to send migrants to the nation’s capitol or Martha’s Vineyard, saying that “We send them where they want to go.”

Recently, Rep. Troy Nehls (R-Texas) wrote that he received confirmation from the U.S. Department of Homeland Security that Venezuela was emptying its prisons and sending criminals to the U.S. southern border.

“We call on both of you and your departments to take every possible step to stop illegal migration from Venezuela,” the lawmakers wrote in their letter, referring to Blinken and Mayorkas.

“The United States should work with countries Columbia, Panama, and other Central American nations to establish safe third country agreements and asylum cooperation agreements to allow those countries to receive Venezuelan migrants,” according to the letter.

The lawmakers offered some recommendations to the two administration officials.

“The Department of State should immediately pressure countries along the route from South America to deport those seeking to illegally cross their borders and enter the United States,” the letter says.

As for the Department of Homeland Security, the lawmakers asked that it process asylum claims faster, immediately remove those who have been rejected, and grant legitimate asylum claims within a three-week window.

“To accomplish this, DHS must surge resources and allow for migrants to have their cases heard by both CBP officers and asylum officers at Border Patrol and ICE detention facilities,” the letter says. “Without fast adjudication, those with legitimate asylum claims will wait years to receive benefits to which they are entitled, and those with invalid asylum claims will never face deportation for breaking our nation’s immigration law and undermining our asylum process.”

The lawmakers want Blinken and Mayorkas to answer questions by Oct. 3, including “What efforts are being taken to encourage Mexico, Central American countries, and South American countries to apprehend migrants and deport them before they reach our border?”