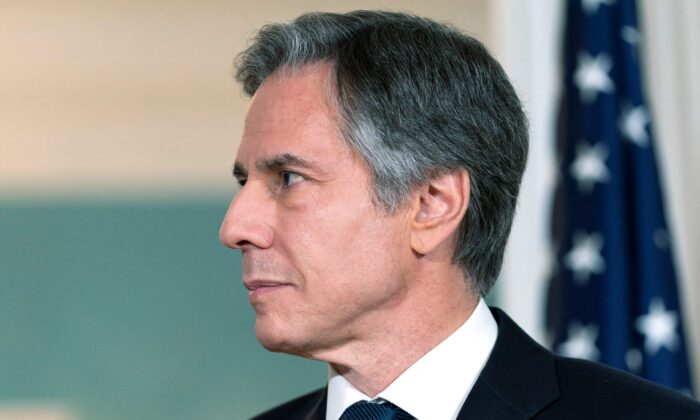 U.S. Secretary of State Antony Blinken on Monday declined to disclose what the Biden administration would do to pressure the Chinese Communist Party (CCP) into allowing access to the Wuhan laboratory where the CCP virus, which causes COVID-19, is thought by some to have originated.

“What would the U.S. actually do of substance to pressure China to give access to the lab if China does not grant that access?” Rep. Lee Zeldin (R-N.Y.) asked Blinken during a congressional hearing.

“What we’ve seen, unfortunately—more than unfortunately—from the PRC since the beginning of this crisis is a failure to meet its basic responsibilities in terms of sharing information, providing access, and doing that in real-time with transparency. That was true at the start, it remains true, unfortunately, today,” Blinken said.

“And I think what you’re seeing is, through the work that’s being done, for example, at the WHO, the work that we’re doing, and the concerns expressed by countries around the world that there is a strong chorus insisting that China make good on its commitment, on its responsibilities to provide the information.”

Blinken then said he did not want to say what the Biden administration might do on the matter in the future.

“I don’t want to get into hypotheticals going forward in the future about what we would or would not do but I think I can say with confidence that there is going to be an increasing international demand that countries, including China, meet their responsibilities when it comes to providing information and access to transparency on the local health, including COVID,” he added.

Zeldin, a GOP gubernatorial candidate, said many members of Congress are skeptical that the CCP would grant access to the Wuhan Institute of Virology and want to know what the next step would be “if and when China says that lab access won’t be granted.”

Chinese officials have repeatedly blocked outside investigators from probing the origins of the CCP virus. Top officials in the country have suggested without evidence that the virus started outside China, despite the first known cases appearing in Wuhan close to the high-level lab.

Blinken, appearing on “Axios on HBO,” said that “we have to get to the bottom of what happened” but offered no ideas on how China would be held accountable.

“What the [Chinese] government didn’t do in the early days and still hasn’t done is given us the transparency we need, the international community—access for inspectors and experts, the sharing of information in real-time. That has to happen,” he said.

Pressed on whether the United States would go as far as imposing sanctions in response to the CCP’s tactics, Blinken demurred.

“At the end of the day, it’s profoundly in China’s interest to do this as well, because, look, it suffered too in the outbreak of this pandemic,” he said. “It presumably has an interest as well, especially if it purports to be a responsible international actor, to do everything it can to provide all the information it has to make sure we can hopefully prevent this from happening again.”

The testimony and interview came as U.S. intelligence officials are working to try to determine where, how, and when the CCP virus originated. The intelligence community has coalesced around two theories: a natural origin, followed by an animal-to-human transmission, and a lab leak. President Joe Biden ordered late last month the intelligence community to “redouble their efforts” and produce a report to him within 90 days.

“The initial inquiry that the president ordered in March, that reported out some weeks ago, concluded that the two most likely scenarios were a natural occurrence, a transmission from animal to human, or a lab leak,” Blinken told members of Congress on Monday.

“No one has yet found conclusive evidence that makes clear which one of those it is, which is why the president … ordered the intelligence community to do an intensive review to see if we can finally come to a determination of what happened to where and why it happened.”