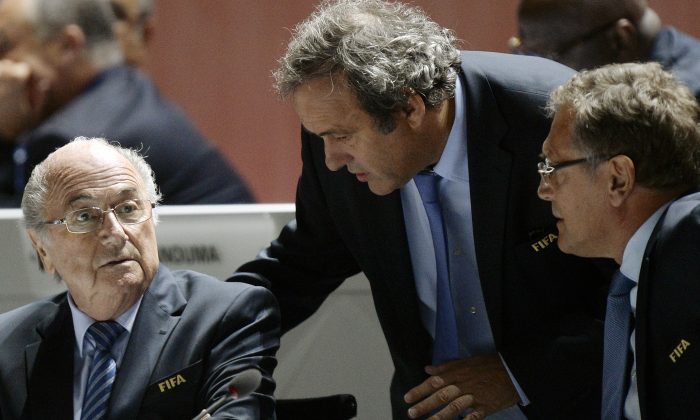 ZURICH— Sepp Blatter is out of a job at FIFA. Michel Platini might never even get there.

Two of the most powerful men in soccer were handed 90-day suspensions by the FIFA ethics committee on Thursday, essentially ending Blatter’s 17-year reign as president and likely stunting Platini’s chances of replacing him.

Both Blatter and Platini, former allies who turned into rivals in the buildup to the most recent FIFA presidential election, have become embroiled in a Swiss criminal investigation. Blatter has been labeled a suspect and questioned by authorities, while Platini was said to be somewhere between a witness and a suspect.

Both maintain their innocence.

“President Blatter looks forward to the opportunity to present evidence that will demonstrate that he did not engage in any misconduct, criminal or otherwise,” Blatter’s lawyer, Richard Cullen, said in a statement.

Platini also pledged to fight the decision, calling the allegations against him “astonishingly vague” in a statement sent from UEFA hours after the Frenchman was banned from working as the body’s president.

“I want everyone to know my state of mind: more than a sense of injustice or a desire for revenge, I am driven by a profound feeling of staunch defiance,” Platini said. “I am more determined than ever to defend myself before the relevant judicial bodies.”

The statement from UEFA, which stressed “its full confidence” in Platini, has exposed the body’s officials to potential action under FIFA ethics rules. According to UEFA statutes, Platini should have been replaced by Angel Maria Villar, the highest-ranking vice president.

“(Platini) is currently suspended and will therefore not perform his official duties for the time being,” UEFA said in a statement, still referring to Platini as president. “UEFA is fully aware of its responsibilities under the relevant provisions of the statutes.”

UEFA’s 54 member nations are due to meet in Nyon, Switzerland, next Thursday to discuss the worst crisis in its history and the bid by Platini to succeed Blatter.

The 90-day suspensions for Blatter and Platini were imposed after the Swiss authorities started investigating a payment from FIFA to the former France midfield great in 2011 for work carried out at least nine years earlier.

Another presidential hopeful, Chung Mong-joon, was suspended for six years in a separate case and FIFA secretary general Jerome Valcke was banned for 90 days.

The suspensions can be extended by up to 45 days.

The International Olympic Committee called on FIFA to consider a “credible external presidential candidate of high integrity” as Blatter’s replacement.

“Enough is enough,” IOC President Thomas Bach said. “We hope that now, finally, everyone at FIFA has at last understood that they cannot continue to remain passive.”

Issa Hayatou, the longtime head of the African soccer confederation who was reprimanded in 2011 by the IOC in a FIFA kickbacks scandal, took over from Blatter as acting FIFA president.

The 69-year-old Cameroonian, who has a serious kidney illness that requires regular dialysis sessions, is currently in Yaounde and is expected to travel to Zurich soon.

Hayatou said he would not stand for president in February but remained committed to the reform process.

Blatter’s suspension stops a career that began at FIFA in 1975 and includes the last 17 years as president. He survived waves of scandals affecting some of his closest allies until he was placed under criminal investigation.

Last month, Swiss authorities turned up at Blatter’s office at FIFA headquarters and interrogated him. The criminal case centers on Blatter allegedly misusing FIFA money by making a $2 million payment to Platini.

Blatter was also questioned by Swiss investigators about broadcasting contracts sold to former FIFA vice president Jack Warner in 2005 that were supposedly undervalued.

Cullen, Blatter’s lawyer, said the ethics committee failed to follow procedure and based its decision on a “misunderstanding.”

“The attorney general in Switzerland … opened an investigation but brought no charge against the president,” Cullen said. “In fact, the prosecutors will be obliged by law to dismiss the case if their investigation, barely two weeks old, does not establish sufficient evidence.”

The suspension of Platini could have the most far-reaching implications. The former European player of the year submitted his formal candidacy to stand in the Feb. 26 election to replace Blatter on Thursday morning. That means it will have to be considered by the election committee after the Oct. 26 deadline for candidacies.

Chung, a former FIFA vice president, was found guilty of breaches relating to the investigation into bidding for the 2022 World Cup, of which South Korea was a contender. Valcke, Blatter’s top administrator, had already been put on leave last month after being the subject of allegations over a deal for black market sales of tickets to 2014 World Cup matches.